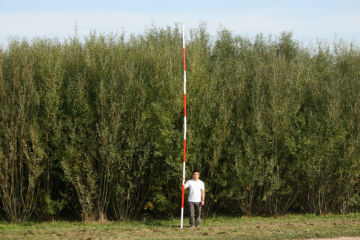 Research into the genetics and biomass composition of shrub willow shows that triploid hybrids generally outperform diploid and tetraploid hybrids. This points the way for rapid and accurate genetic improvement of willow grown for biofuels. The research also shows that traits such as stem height and area can indicate how much biomass a specific hybrid will yield early in the breeding process.

Hybridization of shrub willow, a short-rotation woody crop that is a promising source of renewable energy, has led to the development of new cultivars over the last thirty years. These cultivars have improved disease and pest resistance, and—of particular importance to producers—resulted in higher biomass yields through hybrid vigor. A better understanding of the genetic basis of shrub willow hybrid vigor could lead to even more improved cultivars in the future, yet little is known about the underlying genetics behind these improvements. 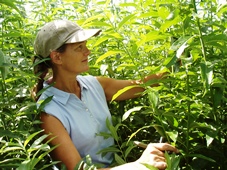 They also researched traits that could indicate early in the breeding process how much biomass a hybrid is likely to yield. Such early measurements would be extremely valuable in developing new hybrids quickly and accurately.

In a three-year study, beginning in 2008, the researchers selected the best individuals from families produced in the early 2000s by Richard Kopp and Kimberly Cameron in Smart’s laboratory. They planted 75 genotypes, which included new progeny, as well as many of the parents and some commercial cultivars for comparison in Geneva, New York.

Using flow cytometry, Smart and his colleagues gauged the plants’ ploidy levels—diploid, triploid, or tetraploid. They also calculated the biomass of the genotypes at the end of each of the three growing seasons in a typical harvest cycle by measuring the height and diameter of the tallest stem on each plant, the number of stems per plant, and the specific gravity of stem segments. The stem diameter measurements were used to calculate the mean total stem diameter and mean total stem area of each plot.

The interaction of many factors affects the production of willow biomass. The researchers found that the three types of hybrids had different growth patterns, and that the triploids outperformed not only the diploids and tetraploids, but also many of the available commercial cultivars. In fact, the five highest-yielding hybrids, all triploids, yielded 12.5 percent more than the commercial cultivars. Triploids are also largely sterile, which greatly reduces the possibility of these fast-growing plants spreading into natural areas.

In addition, the triploids also had the greatest specific gravity. Specific gravity (the density of wood relative to water) is a trait related to harvesting efficiency (the amount of stored energy harvested per unit volume) and to the amount of biomass that could fit into a specific volume (such as a truck), which is important to the logistics and economics of transporting and delivering shrub willow biomass.

The specific gravity of a genotype did not increase with age; in fact, it leveled off at the third year. However, more research is needed on specific gravity to better determine its importance for conversion to biofuels

Why This is Important

Developing new triploid hybrids that produce more biomass will be very useful to producers who want to profitably grow shrub willow for biofuel production. Knowing which genotypes can potentially produce the highest yields of biomass and the highest specific gravity will help plant breeders select the most promising hybrids early in the breeding process and swiftly develop new cultivars for the biofuel industry.