A torrefaction demonstration facility employs a patented process to convert biomass into a renewable, energy-dense carbon carrier that functions much like coal, and which can be burned in existing coal-fired power plants 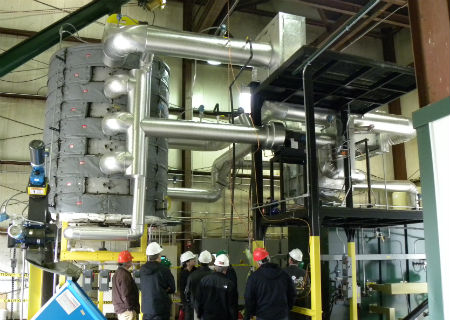 An Innovator in Commercial Torrefaction

Terra Green finished building its Commercial Torrefaction Demonstration Facility in November 2014. The plant serves as a model to show potential customers how a full-size commercial plant could work, and by spring of 2015, Terra Green plans to be working with a power plant that will test their product on a large scale.

Terra Green has patented a torrefaction process which is a thermochemical pretreatment that can be used on almost any type of biomass, including wood from coppiced plantations or natural forests. Grass material can also be torrefied, but Terra Green focuses on wood feedstocks. Wood is chipped, and then heated at temperatures between 250° to 300° C (392° to 572° F) in the absence of oxygen. This removes the moisture content and some volatile organic compounds, and converts the biomass into a solid product that can be used directly or formed into a pellet, briquette, or other densified product. The torrefied biomass is more brittle and easier to grind than raw biomass, a significant benefit to operators of pulverized-coal boilers.

The Advantages of Torrefied Biomass

As a fuel, torrefied biomass is a relatively consistent and uniform product that has some advantages over wood pellets and chips. Pelletized torrefied wood has a higher bulk density and energy content than regular pellets, so more of the product (by weight) can fit into the same space for more efficient transport. Torrefied biomass is also hydrophobic; this ability to repel water may allow it to be stored outdoors without much preparation or worry.

Torrefied biomass can retain 90 percent of the energy value of the original biomass, providing 9,000–10,000 BTU per pound, or 21–23.2 MJ/Kg. It has about twice the caloric value of green wood chips and up to 1.5 times the caloric value of wood pellets. Its moisture content is low, about 1 percent.

A torrefied woody biomass product stores, travels, and functions much like coal. It can be burned in existing power plants, helping to lower their overall greenhouse gas emissions and improve air quality. Therefore it has significant market potential as a renewable fuel that can be co-fired along with coal in conventional electricity generation plants, according to Tom Causer, president and chief operating officer of Terra Green. Augmenting coal with torrefied biomass reduces fossil fuel use and helps coal-based power plants comply with renewable energy-use standards.

Generating electricity isn’t the only use for torrefaction. The product shows promise in heating markets as a replacement for white wood pellets. Torrefied pellets have a much higher heat content, so fuel storage hoppers need to be refilled less frequently. In addition, the hydrophobic (water-repellent) nature of the torrefied pellets eliminates moisture problems that plague white wood pellet storage. Even though this intriguing market potential exists, Terra Green is so far keeping its focus on larger, commercial co-firing applications. 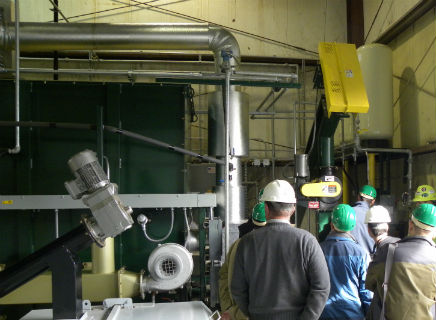 Terra Green’s demonstration facility has the capacity to produce about 1,000 pounds of torrefied wood an hour, or 12 tons a day. It uses virtually no fossil fuels in the process, with the exception of some electricity for fans and other ancillary equipment. This is because, during torrefaction, the hemicellulose component of the woody biomass is volatilized, producing combustible gases that produce the thermal energy required for both pre-drying and torrefaction when burned.

The company aims to fill a niche for small-scale biomass processing plants that could easily fit into rural communities and produce between 65,000 and 100,000 tons of torrefied biomass annually. Like the demonstration plant, such facilities would include a torrefaction reactor and a combustion unit to burn gases from the process to heat the reactor. Building a commercial facility would cost approximately 255 times the plant’s annual capacity in tons, according to Causer, citing “Black Pellets – A Financial Analysis of Costs and Benefits,” a 2014 report by Dr. William Strauss of FutureMetric. Therefore, a commercial plant with 65,000 tons of annual capacity would cost roughly $16 million, and would process about 163,000 tons of raw, green biomass (at 40-percent moisture) a year.

Co-firing with torrefied biomass could have positive social and economic implications for local economies as well. “The synergies of co-firing have great value,” Causer said. If torrefied biofuel replaces a portion of coal in power plants, EPA regulations are more likely to be met, which means plants have a better chance of continuing to operate. And though somewhat reduced, coal is still used, so coal industry employees and the communities that host electrical generation facilities maintain their tax base and jobs. 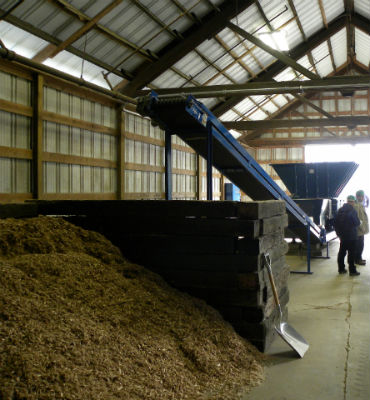 Causer reports seeing significant progress in co-firing biomass in coal plants over the last few years. One plant in Ontario, Canada, is converting to biocoal pellets, which are much like torrefied wood. Another coal-fired plant, Gulf Power’s Herbert Scholz Generating Plant in Florida, co-fired up to 100-percent torrefied wood pellets in 2014. In these tests, they found that adding torrefied wood reduced nitric oxide (NOx,) SOx, mercury, unburned carbon losses, and carbon dioxide emissions compared with emissions streams from coal-alone systems.

The Future of Torrefaction

The coal-fired electrical generation industry is changing. Causer predicts that coal will continue to be burned for the foreseeable future—but it will be supplemented with biomass such as torrefied grass or wood that can be fed directly into the power plant alongside the coal. Not far in the future, he anticipates that forest biomass and purpose-grown energy crops—hybrid willow in particular for the Northeast—will supply the large amounts of biomass that commercial torrefaction plants would require in order to supply a steady source of renewable fuel to power facilities.

This case study has not been peer reviewed and the authors are solely responsible for the content.