The process to make biodiesel involves a chemical reaction. This means that the biodiesel industry is a chemical industry. Those involved in making biodiesel must have a good understanding of the underlying chemistry to ensure they are making quality fuel in a safe manner.

Find these topics and many other related Farm Energy media resources at the Farm Energy Media archive.

Biodiesel is an alternative fuel for diesel engines that is produced by chemically reacting a vegetable oil or animal fat with an alcohol such as methanol or ethanol. In words, the reaction is:

The photo shows a bottle of biodiesel and glycerin (also called glycerol). The biodiesel is the lighter-colored layer at the top. The darker-colored crude glycerin has settled to the bottom. 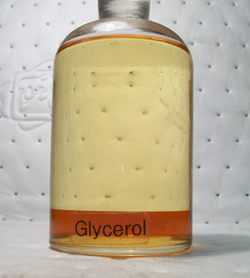 Biodiesel is usually preferred over SVO and WVO because the chemical reaction converts the oil or fat into compounds that are closer to the hydrocarbons found in regular diesel fuel.

The chemical reaction that converts a vegetable oil or animal fat to biodiesel is called “transesterification.” This is a long name for a simple process of combining a chemical compound called an “ester” and an alcohol to make another ester and another alcohol. Oils and fats are included in the ester family. When they react with methanol or ethanol, they make methyl or ethyl esters and a new alcohol called glycerol or, more commonly, glycerin.

The vegetable oils and animal fats used to make biodiesel can come from virtually any source. All of these products consist of chemicals called triglycerides, so biodiesel can be made from soybean oil, canola oil, beef tallow, and pork lard, and even from such exotic oils as walnut oil or avocado oil.

Even used cooking oil or waste oil can be used to make biodiesel. However, these oils present special challenges for biodiesel production because they contain contaminants such as water, meat scraps, and breading that must be filtered out before the oil is converted to biodiesel.

Methanol is the most common alcohol used for making biodiesel. It is sometimes called methyl alcohol or wood alcohol. It is very toxic, and swallowing as little as a spoonful can cause blindness or even death. Dangerous exposure can also occur from breathing methanol vapors or absorbing methanol through skin contact. In the United States, ethanol is usually more expensive than methanol, so it is used less frequently to make biodiesel. It is the alcohol that is found in alcoholic drinks, so it is not toxic in small amounts. However, it is subject to very challenging government regulations because of the tax requirements associated with alcoholic beverages.

High-quality biodiesel is defined by compliance with the American Society for Testing and Materials (ASTM) specification D6751. Fuel testing to verify compliance can be expensive, especially for small producers, but it is the most reliable way to ensure that fuel consumers will have access to high-quality fuel.

Used and Waste Oil and Grease for Biodiesel

Controls and Instrumentation for Biodiesel Production

Transportation and Storage of Biodiesel