At a cost of $1 to $2 per square foot, a high tunnel can add low-cost growing space for season extension or plant protection. High tunnels also do not rely on as much energy inputs as traditional greenhouses with furnaces and forced-air ventilation. Growers and researchers are finding many innovative ways to utilize these structures to supplement their greenhouse operations.

By definition, the high tunnel is a walk-in, hoop or gothic-shaped pipe frame structure that is covered with a single layer of film plastic. It generally does not have electricity and the only heat is provided by the sun. Ventilation is by rolling up the sidewalls or end walls and opening the doors. Irrigation water is provided typically through a drip system. Plant production can be in the soil or in containers on top of a weed mat. Multi-bay tunnels are also available.

These structures have their roots in Europe where they have been used for growing off-season vegetables. Development work in the U.S. has been done at the University of New Hampshire, Pennsylvania State University, Cornell University and in several other states.

High tunnels are most often used for early spring tomatoes, peppers, and cucumbers. Plants are started in a growth chamber or propagation greenhouse and transplanted into the tunnel about a month before they would normally be planted outdoors. This allows the vegetables to be available for market when the price is the highest. 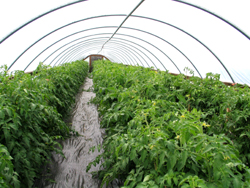 A relatively new use of high tunnels is for the production of specialty cut flowers. Most flowers that do well outdoors will do better indoors with a modified environment. Elimination of wind and rain usually improves quality and shortens the growing season. Some of the most popular flowers are aster, coneflower, dianthus, delphinium, coneflower, snapdragon, sunflower and zinnia. Sales generally go to florists, roadside stands and farm markets. In some areas, pick-your-own farms or businesses have become popular.

In the nursery, high tunnels are commonly used in northern climates for the winter protection of nursery stock, perennials and herbs. Container plants are placed pot to pot on gravel or weed barrier mat. The tunnel, covered with white poly, provides wind and temperature protection. Irrigation may be needed if the weather turns warm for an extended period of time. Ventilation is accomplished by opening the end-wall doors. A layer of foam insulation may be placed over low-temperature-sensitive plants to provide additional protection. In Connecticut more than 2000 acres of plants are protected this way each winter.

Some growers have used high tunnels in place of cold frames for hardening off early season crops such as pansies, snapdragons and vegetable transplants. In place of adding additional expensive greenhouse space that may only be needed for a month in the spring, the high tunnel can provide the space needed at a much lower cost.

Another application for high tunnel technology is in the production of small fruit. Strawberries, raspberrries and other small fruit do very well as the modified environment increases yield as well as earliness. The choice of cultivars, planting time and spacing are critical to getting a good crop. 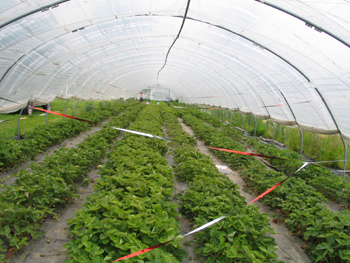 Strawberries growing in a high tunnel.

High tunnels can also be used for fall and winter production of cold-hardy greens (e.g., spinach, claytonia, mustards and kales). In colder regions, additional insulation in the form of supported rowcover can increase yields and survival of winter crops.

Site selection is important. As solar heating and natural ventilation are the means of temperature and humidity control, it is important to locate the tunnel away from buildings and trees. If the crops are to be grown in the soil, organic matter and amendments should be added and the soil should be tested. A swale should be installed around the greenhouse to drain rainwater away.

Steel tubing or fence pipe is the standard material used for the hoops. Posts are driven into the ground about 2’ deep to support the hoops. To get a higher ridge and therefore better ventilation, the ground posts are sometimes extended 2’ to 4’ above grade. A 2” x 12” pressure treated lumber baseboard is attached to the posts with bolts to help make the frame rigid. The end wall frame and doors are made of 2” x 4” lumber. Doors large enough to allow access for a small tractor are desirable if the ground will be tilled. If the crops will be grown in the soil, the structure should be installed so that it can be easily moved from one plot to another.

Widths of 14’ to 20’ are most common but some manufacturers make structures as wide as 30’. Although the length can be any multiple of the 4’ hoop spacing, a 48’ or 96’ length will utilize the 100’ sheets of plastic better. It is best to utilize the stronger 6-mil greenhouse grade of polyethylene that will give four years of service rather than the agricultural grade which usually deteriorates in less than one year. In windy locations, a woven polyethylene has given better service. A hip board, attached to the frames 3’ to 4’ above the baseboard, will hold the plastic when the roll-up sides are open. The plastic is attached to the baseboard and hip board with aluminum extrusions or a double furring strip for a tight seal and easy replacement.

Except for the multi-bay, gutter-connected style which ventilates by opening up the plastic roof, cooling is by roll-up sides and end wall doors. Small manual and automatic vents that can be inserted into the roof can reduce maximum temperatures by about 5ºF if installed on a 20’ spacing. If crops are to be grown during the summer, a shade cloth could be placed over the tunnel to reduce the inside air temperature.

To gain extra growing time for crops such as tomatoes, cucumbers and peppers, a root-zone heating system could be installed. This system utilizes a propane gas hot water heater, circulating pump, ¾”-diameter poly pipe placed 12” below the soil surface, and a remote bulb thermostat to maintain a 70 to 75ºF soil temperature in the root zone. Electricity will be needed to operate the pump. A standby portable propane heater could also be used for cold nights.

Since the high tunnel will exclude rain, irrigation water is needed for the plants. If zoned properly, several high tunnels may be supplied by a 1” poly pipe line. Where the tunnels are located a distance from water, a trailer-mounted tank could be used for the water supply. For crops grown in rows or containers, a drip system will reduce the amount of water needed.

Although high tunnels can’t provide the same environment as a greenhouse, they can offer a grower the opportunity to have additional growing space during the spring and fall for crops that are temperature sensitive. They do require more attention and maintenance than crops grown in the field.