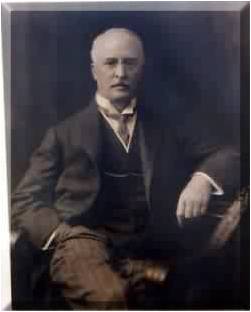 Rudolf Diesel invented the diesel engine in the 1890s. From the beginning, this engine could run on a variety of fuels, including vegetable oil. In 1900, one of the new diesel engines featured at the Paris Exposition was powered by peanut oil. However, because cheap petroleum fuels were easily available, few people were interested in alternatives (Pahl, 2005, pp. 18-22).

As early as the 1930s, there was interest in splitting the fatty acids from the glycerin in vegetable oil in order to create a thinner product similar to petroleum diesel. In 1937, G. Chavanne was granted a Belgian patent for an ethyl ester of palm oil (which today we would call biodiesel). In 1938, a passenger bus fueled with palm oil ethyl ester plied the route between Brussels and Louvain (Knothe, 2005, p. 10).

In the 1970s, the petroleum oil embargo caused many countries to look to vegetable oil as a possible fuel. Scientists in Austria, the United States, South Africa, and many other countries rediscovered that straight vegetable oil could be used to run diesel engines; however, eventually the poor quality of the fuel spray caused by the thickness (viscosity) of the vegetable oil caused damage to the engines. Scientists then conducted experiments to convert the vegetable oil into biodiesel. The word “biodiesel” was probably first used in about 1984 (Van Gerpen et al., 2005, p. 4).

The first biodiesel manufacturing plant specifically designed to produce fuel was started in 1985 at an agricultural college in Austria. Since 1992, biodiesel has been commercially manufactured across Europe, with Germany being the largest producer. In the United States, biodiesel was first manufactured commercially in 1991 in Kansas City, Missouri. In 1995, the University of Idaho provided biodiesel to Yellowstone National Park, which used the fuel in a truck that has been driven several hundred thousand miles without damage to the engine and is still in use. As a result, other national parks began using biodiesel in their vehicles (Pahl, 2005, pp. 40-41, 83, 156). 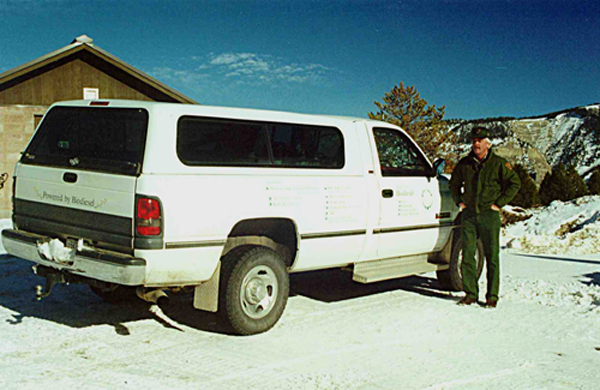 Jim Evanoff, management assistant of Yellowstone National Park, stands next to the first biodiesel-powered truck in the park. The “Truck in the Park” project led to more national parks using biodiesel to fuel their vehicles.

At this time, one problem with biodiesel was its often uneven quality. In 2001, ASTM International, one of the world’s largest voluntary standards development organizations, published a standard for biodiesel: ASTM Standard D6751. This allowed engine manufacturers and fleet managers to feel confident that biodiesel would satisfy their quality requirements.

Growth of the Biodiesel Industry

Because biodiesel and other biofuels can help countries reduce their dependence on imported fossil fuels, and because biofuels frequently produce less air pollution and less net carbon emissions than fossil fuels, governments around the world became very interested in promoting their use. Governments issued mandates requiring the use of biofuels and offered tax credits for their use. As a result, production of biodiesel grew rapidly. By 2004, there were 25 biodiesel plants in the United States, and by 2009, the National Biodiesel Board listed over 200 manufacturers on its Web site. Worldwide, biodiesel production grew from about 1 billion liters in 2001 to 6 billion liters in 2006 (Pahl, 2005, p. 167; National Biodiesel Board; Worldwatch Institute, 2007, pp. 4-6).

Government policy has been very important to the development of the biodiesel industry in the United States. The Energy Policy Act of 2005, which was intended to reduce the need for imported petroleum, required government fleets to purchase alternatively fueled vehicles. When the Department of Energy decided that biodiesel use could substitute for a portion of a fleet’s vehicle purchase requirement, biodiesel became an attractive option for some fleet operators.

In 2007, the combination of historically unprecedented high petroleum prices and a $1.00/gallon federal excise tax credit in the United States caused the biodiesel industry to expand greatly. This was aided by mandates in states like Minnesota, which required that 2% biodiesel be used in all diesel fuel sold within the state. More recently, the National Renewable Fuel Standard, released in 2010, requires petroleum companies to buy alternative fuels in proportion to their sales of traditional petroleum fuels. This is expected to cause a similar boost in biodiesel sales.

The rapid growth of the biodiesel industry has fostered concern that farmers will be encouraged to grow more and more crops for fuel and that less and less land will be available for food. By 2008, as food prices worldwide rose, the “food vs. fuel” debate took off.

Another controversy centers on an issue termed “indirect land use change” (ILUC). ILUC is the study of the indirect and unintended consequences in carbon emissions caused by production of a biofuel feedstock. For example, if more cropland is dedicated to producing biofuel feedstocks, perhaps forestland or wetlands somewhere else in the world might then be converted to cropland. This land conversion causes carbon to be released into the atmosphere. Some scientists have suggested that because of indirect land use change, certain biofuels actually caused more carbon to be released into the atmosphere than the corresponding fossil fuel.

The EPA’s Renewable Fuel Standard Program Regulatory Impact Analysis, released in February 2010, analyzes ethanol and biodiesel in terms of life cycle greenhouse gas emissions, including possible indirect land use change. This analysis found that, on average, corn ethanol produced in a plant powered by natural gas results in a 21% reduction of greenhouse gases compared to gasoline. Soy biodiesel results, on average, in a 57% reduction in greenhouse gases compared to fossil diesel, and biodiesel produced from waste grease results in an 86% reduction.

Biodiesel made from oilseed plants grown on cropland cannot possibly hope to replace petro-diesel in the foreseeable future: there simply isn’t enough land. Biodiesel, instead, could be seen as one part of a larger plan to reduce air pollution, carbon emissions, and dependence on fossil fuels. Energy crops can also be an important source of income for farmers (Van Gerpen et al., 2007, pp. 15-19).

Scientists are currently researching ways to produce biodiesel using new feedstocks that are less limited by the availability of land. For example, some types of algae can produce oil. Energy crops could also be grown on land that is not suitable for food crops, such as soil that is too acidic or too salty, that has too many minerals or is too shallow, or that is in danger of eroding. In these cases, energy crops might help stabilize and restore this land.

Scientists are also experimenting with producing fuel from non-oilseed feedstocks such as inexpensive, non-edible biomass (agricultural residue, waste from the wood products industry, and switchgrass and other grasses) that can be converted into a diesel replacement. While it is a fairly simple process to convert vegetable oil or animal fat into biodiesel, the conversion of cellulosic feedstocks to fuel is more complicated and more expensive. To produce a hydrocarbon fuel, the biomass is generally first converted into a synthetic gas using high heat. Then the gas can be converted into a liquid diesel fuel.

The fuel resulting from these new technologies is technically not “biodiesel,” which is defined, according to the ASTM specifications, as “mono-alkyl esters of long chain fatty acids derived from vegetable oils or animal fats.” Instead, these fuels from cellulosic feedstocks are termed “renewable diesel” or “green diesel.” This term also includes fuels produced from vegetable oils and animal fats using conventional petroleum-refining techniques.

Biodiesel and the Food vs. Fuel Debate