Jatropha seed oil is used in soaps, and energy for lighting and heating in subtropical and tropical areas where it is planted as living fences to stop soil erosion. Its biodiesel potential is being researched because the seeds contain from 25% to 40% oil.

Jatropha curcas is an oilseed tree or shrub that grows in almost all subtropical and tropical areas. It has been heralded as a new biodiesel feedstock because it is a non-food crop that can grow without much water.

Biodiesel producers in the U.S. are sometimes curious about jatropha because of all the things they have heard. Keep in mind that jatropha is not frost-tolerant, and will only grow in the warmest areas of the United States.

In addition, yields from jatropha are very variable. For example, with good soil and adequate rainfall, jatropha can produce 5 to 7 tonnes of seed per hectare. Under semi-arid conditions, the yield can drop to 1 to 3 tonnes per hectare. Although the tree will survive without much water, it may not produce nuts (Brittaine and Lutaledio, 2010).

The physical and chemical properties of jatropha oil can vary based on environmental factors, genetics, and the maturity of the seeds. This may make it more challenging to use as a biodiesel feedstock because process adjustments may be required to compensate for the property changes.

Because jatropha is a wild plant that is often harvested by low-income farmers in poor countries, the characteristics of the oil are expected to be variable. For example, oil from seeds of over-ripe fruit, or seeds that have been stored in high humidity conditions, will be high in free fatty acids.

The University of Idaho tested the oil content of jatropha seeds from Florida and Guatemala. The results are in the table below.

Percent of Oil in Jatropha Seeds

The bar graph below shows the fatty acid profiles of jatropha varieties grown in Florida, Guatemala, and Indonesia. They all have fairly low levels of the saturated fatty acids palmitic (16:0) and stearic (18:0), and much higher levels of unsaturated fatty acids oleic (18:1) and linoleic (18.2). Therefore, biodiesel from jatropha would have better cold flow properties but less oxidative stability than a more saturated oil. An interesting point is that the Indonesian variety had significantly higher oleic than linoleic fatty acids in 2007, but the opposite in 2008, suggesting a response to different growing conditions. 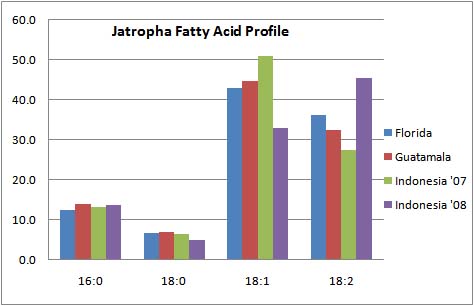 Biodiesel made from jatropha oil has a cloud point of 8 degrees Celsius, according to tests conducted at the University of Idaho. This is primarily due to the 20% saturated fat content of jatropha, compared with 15% saturated fat in soybean oil, and 6% in canola. Biodiesel from saturated fats tends to gel at higher temperatures.

Jatropha oil has a high cetane rating and low sulfur content, both of which are beneficial for biodiesel production.

Jatropha is Not Edible

Jatropha seeds and oil are poisonous. While all parts of the plant contain toxins, the seeds are considered the most poisonous part of the plant: as few as one to three seeds can cause abdominal pain, nausea, and diarrhea in humans. This poses a problem in terms of producing biodiesel, since the seed cake left over after oil extraction cannot be fed to animals.

Matt Morra and Vladimir Borek of the University of Idaho’s soil science department have been conducting research to determine whether the toxic compounds survive the process of converting the oil into biodiesel.

A 114-page report published by the Food and Agriculture Organization of the United Nations, Jatropha: A Smallholder Bioenergy Crop, The Potential for Pro-Poor Development, points out that jatropha has many other uses in addition to biodiesel. This versatility may make it useful in remote areas where other fuel is not available, and on degraded land not suitable for farming. The following sections of this article are summarized from the FAO report.

Jatropha planted from seed will develop a tap root that allows it to bring up water from deep in the soil. The tap root also extracts minerals far down in the soil profile. The plant then returns those minerals to the surface of the soil through leaf fall and other debris. Therefore, jatropha can be used to reclaim degraded farmland.

Jatropha is often planted as a “living fence” to keep out livestock and reduce wind erosion. The surface roots help prevent soil erosion.

In Madagascar and Uganda, jatropha is grown to provide support and shade for vanilla plants.Plant extracts of jatropha are used for dying cloth, and as a traditional medicine for humans and animals. Jatropha seed cake has a high nitrogen content, similar to chicken manure, and can be used as an organic fertilizer.

The seed cake, fruit shells, and seed husks can be used as biomass fuel. Jatropha oil can be used for lighting, soap-making, and heating, in addition to biodiesel.

Jatropha is a succulent perennial shrub or small tree that can grow up to five feet tall under optimal conditions. It does not do well in shade, but can tolerate bright light.

Each fruit contains two or three black seeds, around 2 cm x 1 cm in size. The seeds contain from 25% to 40% oil. The tree generally takes four to five years to reach maturity.

With adequate water, flowering and fruiting are continuous, meaning that mature and immature fruits are present at the same time, and harvesting must be done by hand.

Jatropha originated in Central America and Mexico. It is now widespread in subtropical and tropical areas.

In the 20th century, several African countries exported jatropha seeds – the oil was used in soap-making. However, this trade ended in the 1970s, when cheaper synthetic detergents entered the market. During World War II, jatropha oil was used as a diesel fuel substitute in Africa.