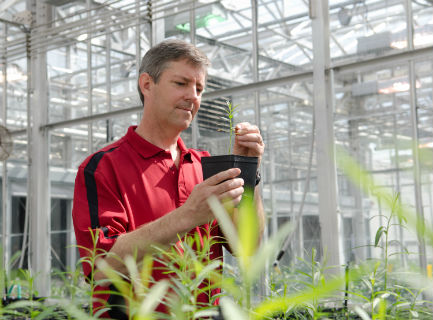 Larry Smart, a professor in Cornell University’s Department of Horticulture since July 2009, is a plant geneticist and physiologist who has been a leader of efforts in genetic improvement of fast-growing shrub willow as a bioenergy crop since 1998. He has assembled a large and diverse collection of willows, which serves as a basis for traditional breeding.

Using optimized techniques for pollen extraction and controlled pollination, his group has produced more than 450 new families of willow varieties, including a number of novel species hybrids that display high yield and disease and pest resistance. An elite set of seven high-yielding varieties has been patented in the United States and a number of willow varieties selected in the breeding program have been licensed to a commercial nursery, Double A Willow in Fredonia, New York, for production of planting stock for bioenergy producers. Smart’s group has also studied the basic genetics of willow, including heritability of yield traits, heterosis, and population diversity. In addition to Salix genetics, his research has included studies of cuticular wax biochemistry and drought tolerance.

Larry received his bachelor of science degree in biology at Cornell University in 1987 and a PhD in genetics at Michigan State University in 1992, studying structure-function relationships in photosystem I in cyanobacteria. He was an NSF Postdoctoral Fellow in the Department of Vegetable Crops at University of California-Davis from 1992 to 1996, where he studied gene expression in guard cells and epidermal cells of Nicotiana glauca and Vicia faba.

While on the faculty at the State University of New York (SUNY) College of Environmental Science and Forestry from 1996 to 2009, he taught the courses Cell Physiology, Plant Physiology, Techniques in Plant Physiology, and a Senior Synthesis in Biotechnology through his tenure as an assistant and then associate professor in the Department of Environmental and Forest Biology. Since fall 2010, he has taught PLBR4030 Genetic Improvement of Crop Plants as a joint member of the Department of Plant Breeding and Genetics at Cornell.

He is a member of the editorial board for the journal Global Change Biology-Bioenergy and was given the Promising Inventor Award in 2005 by the SUNY Research Foundation.