Perennial crops dedicated to biomass production are just starting to be developed.  Most existing varieties of potential feedstock crops, such as switchgrass, have been bred for use as forage or conservation. But new varieties with traits that bioenergy producers require, especially high yields of biomass, will be a boon to a growing bioenergy industry. Work by NEWBio’s Feedstock Improvement Team, led by Larry Smart of Cornell University, and Stacy Bonos of Rutgers University, is helping to develop those new varieties, with useful traits such as resistance to harmful insects and diseases.

that perform better and can be grown on a wider range of marginal lands in the Northeast. NEWBio has focused on types of land that have low value for traditional crops, including reclaimed mineland, because selected varieties of willow and switchgrass have the potential to grow there and avoid competing with food and feed crops for prime land.

By helping to commercialize these varieties, the team provides growers with bioenergy crops that produce more reliable yields and greater profitability.

The team also developed genomic tools to accelerate the breeding of new varieties for high production, helping to ensure a thriving bioenergy future.

Through the NEWBio Project, the Feedstock Improvement Team set out to accomplish several tasks:

Addressing disease and pest problems in perennial feedstocks through breeding is an important step in developing a profitable biofuels industry, because it is not sustainable to use pesticides as a management tool. The researchers investigated the genetic basis for resistance to several pests and diseases that affect willow and perennial grasses, with a goal of producing new varieties with improved resistance. 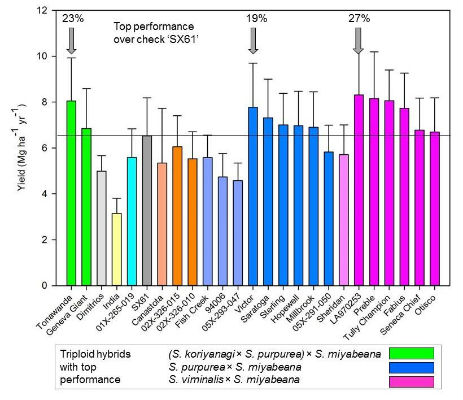 Breeding and selection for willow and switchgrass yields on reclaimed mineland

Reclaimed minelands, with their heavily compacted and rocky soils, provide harsh conditions for crop establishment and growth. Through research trials in West Virginia and Pennsylvania, the Feedstock Improvement Team identified practices and varieties which are providing the foundation for ongoing breeding and improvement of biomass crops for mineland production.

A thriving bioenergy industry in the Northeast begins with high-yielding biomass crops that grow well in our region. The Feedstock Improvement Team’s work in developing varieties of switchgrass and shrub willow that producers can grow successfully and profitably strengthens the industry’s foundation and improves its future prospects. Lines produced through breeding and selection in this task are likely to improve yields by 20% over existing commercial varieties.  Much of the team’s work aimed at growing bioenergy crops on marginal land, especially reclaimed mineland, of which there are 1.2 million acres in three Northeast states alone.

Just as important, the team established the genetic resources and tools for breeding more successful varieties down the road, ensuring that producers will always have access to the high performing biomass crops they need.

Publications by the Feedstock Improvement Team

For all NEWBio Project information, see the index: Resources from NEWBio: The Northeast Woody/Warm-season Biomass Consortium

Authors of this Article