Switchgrass production must compete with other potential land uses and be profitable for growers, and biofuel markets for perennial grasses are still quite limited. So why would a rational producer raise switchgrass for biofuel? Research shows that farmers do consider incentives other than profits, money, including environmental and conservation benefits, and potential policy incentives.

In a biofuel industry that’s still in its infancy, profit alone might not be enough reason to invest in switchgrass production when other crops that can be grown on the same land offer higher returns. With their potential for greater profits, hay, corn, and corn stover may be more attractive to growers. 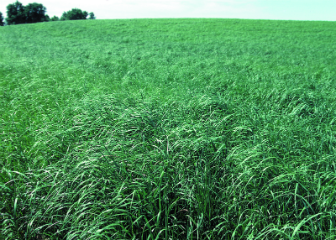 So what market conditions could encourage producers to grow switchgrass and other perennial grasses on marginal lands? Researchers have found that growers do value conservation and other environmental benefits. Putting a monetary value on those benefits could help connect perennial grasses to existing conservation programs. And new policies, such as credit incentives, might also spur production.

The utility of a crop to an individual producer is determined by more than just the price that the crop commands. Overall improvements to the producer’s operations and land quality are also important considerations. Switchgrass can provide benefits that don’t bring monetary returns in today’s market, such as reduced soil erosion and runoff, wildlife habitat, and soil carbon sequestration. Producers might choose to grow perennial grasses if they find them to be environmentally beneficial. The difficulty comes in calculating how much value producers and society place on these benefits.

Keri Jacobs, assistant professor at Iowa State University, and her colleagues surveyed producers and others in the agricultural industry at the 2012 and 2013 Integrated Crop Management (ICM) conferences. They asked participants to rank the drivers of and barriers to producing perennial grasses such as switchgrass, and asked how much revenue the respondents would be willing to forego to produce switchgrass. 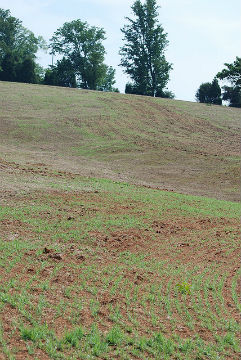 Jacobs and her colleagues found that growers, especially those with marginal land, do value the (non-monetary) environmental and conservation benefits associated with switchgrass production. Survey respondents with more than 20% of land classified as highly erodible (HEL) said they believe that erosion control, carbon sequestration, and wildlife habitat are important factors in deciding what to grow. But is it possible to put a dollar figure on those returns?

The survey showed that 70% of producers said they do value these “non-priced” benefits. Their responses clearly revealed that the more HEL land a producer manages, the more willing he or she is to accept a lower return from switchgrass production relative to the competing use. Thus the on-farm benefits associated with switchgrass production would be factored into the producer’s production decision, even though there is no market value for these benefits.

To encourage more producers to grow switchgrass for the biofuels market, they must be able to accurately calculate and compare the returns from growing perennial grasses and the alternatives in order to determine the best option for using their land. The work of Jacobs and her colleagues shows that producers may inherently place a monetary value on benefits that have no current market price.

Still, the profitability of switchgrass production has changed over the last decade. During years when hay prices were low—most recently, before 2004—switchgrass might have been able to compete for land use. Since then, however, the price for Midwest hay has roughly doubled, to $80 per ton, making switchgrass much less competitive. Similarly, switchgrass is unable to compete with corn and corn-with-stover-removal based on current and recent commodity prices.

Research by Richard Perrin of the Department of Agricultural Economics at the University of Nebraska shows that it costs about $68 per ton of dry matter (DM) to produce switchgrass in the Midwest. With current corn prices around $4.60 per bushel, an acre of land in the Midwest would have to yield less than 60 bushels of corn to make switchgrass a more profitable crop on that acre, assuming switchgrass yields 3 tons per acre at a price of $80 per ton. 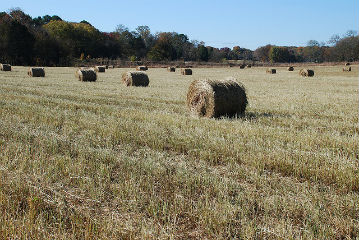 In addition, a complicating factor in the economic analysis of switchgrass derives from its multi-year production requirement. Switchgrass requires a 10-year commitment, with a 2-year establishment period. A thorough economic analysis needs to include the impacts to producers of the “real-option” approach. There is uncertainty about the prices of switchgrass and competing crops (such as corn and soybeans). This uncertainty translates into value in choosing not to produce switchgrass, and so any economic analysis of the crop is improved using a “real-options” approach: meaning, the value of not making the 10-year commitment to switchgrass should be considered in the discussion. Ongoing study of county-level factors in Hamilton County, Iowa, shows that, in a real-options framework, the returns from switchgrass have to be significantly greater than from corn in order to encourage a producer to shift from corn or corn/corn stover production to switchgrass.

For a rational producer thinking about growing switchgrass for biofuel, the profitability of the crop is not the only consideration. Most producers do consider conservation benefits to have value, but any analysis must include returns to production, alternative uses for the land, the value of nonmarket benefits, and, potentially, public policy mechanisms such as incentive payments or credits for producers.