Researchers delve into the economic incentives that would induce farmers to grow switchgrass for cellulosic biofuel.

A survey of crop farmers in the North-Central region of the United States finds that they would ask for an average of $230 per acre, or about $82 per dry ton, to grow switchgrass for cellulosic biofuel on their marginal crop land. The survey also found that farmers are more willing to use that land to produce switchgrass themselves, rather than lease out the land to another entity for growing switchgrass. 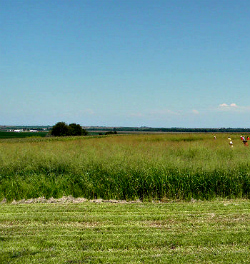 The U.S. Congress has mandated, under the Renewable Fuel Standard, that cellulosic biofuels provide 16 billion gallons a year of transportation fuel by the year 2022. However, a sustainable biofuel industry requires a steady supply of cellulosic biomass, and in order to establish that supply, farmers must have an economic incentive to grow the feedstock.

For the last decade, researchers have been trying to determine how much cellulosic feedstock U.S. producers are willing and able to supply. Richard Perrin, Mustapha Alhassan, and Lilyan E. Fulginiti of the Department of Agricultural Economics at the University of Nebraska, Lincoln (UNL), wanted to refine and add to that research. They sought to find out how much revenue farmers in the North-Central region, the most productive grain-producing region in the country, would need in order to shift their marginal crop land into switchgrass production.

Switchgrass is an attractive feedstock crop for cellulosic ethanol because it produces large amounts of biomass, is native to the region and familiar to farmers, and can be grown across much of the United States.

Perrin and his colleagues used one of four standard approaches, called the contingent valuation approach, to gather information directly from farmers on potential choices. During the winter of 2014-2015, the researchers sent surveys to 2,100 farmers in 10 North-Central states and received responses from 54 percent.

Their survey asked producers two whether, if they were offered a specific net return per acre, they would be willing to accept a contract to grow switchgrass on their least-productive field for the next five years.  They were also asked if they would be willing to lease out that land for switchgrass production. The farmers were given information on the average cost of establishing, growing, and harvesting switchgrass, as well as average annual net revenue.

Each producer was randomly assigned one of nine different net return levels, providing information about potential production response at different price levels. The researchers then analyzed the results.

Their work was supported by the USDA National Institute of Food and Agriculture and by UNL’s Agricultural Research Division.

The average farm-gate net returns that farmers said they would accept—$230 per acre, or $82 per dry ton—is close to the goal of $84 per dry ton, delivered to the biorefinery, set by the U.S. Department of Energy (DOE), which leads the country’s renewable energy efforts. Regional land values and rental rates had a strong influence on the prices that farmers were willing to accept to convert to switchgrass. In the two sub-regions with lower land values and rental rates, average net returns of $75 and $82 per dry ton were acceptable. In the third region, however, where land values were highest, the acceptable $99-per-dry-ton price was much higher than the DOE’s goal.

Interestingly, farmers were more willing to grow their own switchgrass than lease out their land for that purpose. Farmers would only accept an average of $14 per acre more to lease their land (about $3.50 per ton), rather than to grow switchgrass themselves.

But in the biofuel system, that extra cost to biorefineries could be offset by savings in transaction costs and the scale of production. Biorefineries face significant transaction costs in trying to negotiate individual production contracts with the hundred or more producers required to supply the plant. The refieneries could instead offer to lease land at a blanket rate, producing and delivering the switchgrass from the individual farms themselves.  While biorefineries would need to pay a higher rate to the farmer for the leasing approach, they could likely produce at lower cost because of scale economies, and reduce the transaction costs related to negotiating with farmers.

Although the development of a cellulosic biofuel industry is lagging, it may someday thrive—but only if there is a consistent supply of affordable feedstocks, such as switchgrass. This study investigates more deeply the economic incentives that could persuade farmers to produce switchgrass for biomass. It also gives biofuel processors more information on how to obtain feedstocks, through negotiation with producers or leasing land to grow their own supply.