The most environmentally friendly biodiesel feedstocks are used grease and oil. This article discussed how to turn waste oil and grease from restaurants into energy.

Some of the most environmentally friendly biodiesel feedstocks are used cooking oil and waste grease. According to the EPA’s Renewable Fuel Standards Program Regulatory Impact Analysis, released in February 2010, biodiesel produced from waste grease results in an 86% reduction in greenhouse gases, compared to petro-diesel.

There are two general categories of waste oil and grease. The cleanest and easiest to work with is used cooking oil, also called waste vegetable oil or used fryer oil. This is edible oil that has been used multiple times in a deep-fat fryer. The second type is called “trap grease.” Restaurants are required to install grease traps in their drains to prevent fats and oils that go down the drain from entering sewer pipes. The grease in these traps can be collected to make biodiesel.

The main challenge to biodiesel production from used oils and greases is the high percentage of free fatty acids (FFAs) in the feedstock. Fats and oils are composed of triglycerides – three fatty acid molecules attached to a glycerol molecule. In used oils and greases, some of the triglycerides have broken down so that the fatty acids are separated from the glycerol molecule. These are called free fatty acids. These free fatty acids tend to react with the alkali catalyst in biodiesel production to form soap instead of biodiesel. This reduces the level of free catalyst and thus reduces the speed of the transesterification reaction. Soap formation tends to inhibit the separation of the ester from the glycerin and slow down the reaction. In addition, because the soap must be removed and discarded, more soap formation means less biodiesel.

Used cooking oil is not really a waste product. It is collected by rendering companies, purified, and used for animal feed supplements and other products as well as biodiesel.

Trap grease is often considered waste. It is generally disposed of at wastewater treatment plants and landfills, although sometimes it is collected by rendering companies to be purified and sold for nonedible applications such as burner fuel. 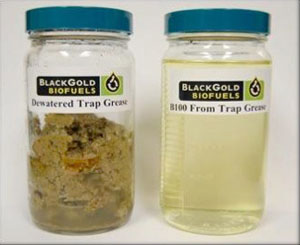 Trap grease and B100 made from trap grease. Photo: BlackGold Biofuels.

Challenges to using trap grease for biodiesel production include foul odor, up to 98% FFA, contamination with food and trash, heavy emulsification, cold flow issues (trap grease is solid at room temperature), and water contamination. In addition, the trap grease collection system is disorganized and fragmented (Haas, 2010).

Despite these technical and infrastructure challenges, at least one firm, BlackGold Biofuels, has developed technology for the successful production of high-quality biodiesel from trap grease.

When a feedstock contains less than 3% or 4% FFA, most people just add extra catalyst, let the FFAs convert to soap, and then remove the soap. From 3% or 4%, up to 10% or 15% FFAs, a common approach is to use vacuum distillation to remove the FFAs from the oil. Then the oil can be processed normally, and the FFAs can be sold as animal feed or esterified separately.

However, used cooking oil and trap grease can contain much more than 15% FFAs. These feedstocks need additional processing before they can undergo traditional alkali-catalyzed transesterification.

One way to deal with a high percentage of FFAs is to use an acid catalyst such as sulfuric or hydrochloric acid to convert the FFAs to esters, followed by an alkali catalyst to convert the triglycerides to esters. One problem with this approach is that the conversion of FFAs to esters causes water formation, which can cause soaps to form during the alkali-catalyzed process.

However, this problem can be overcome by using an acid pre-treatment process to reduce the FFAs of the oil or grease. An acid catalyst and alcohol are added and reacted, the mixture is allowed to reach equilibrium, and the methanol, water, and acid portion that separates is removed. Then, if necessary, more acid and alcohol are added, and the process is repeated until the FFA level is less than 1%. After this pre-treatment process, the reaction is continued with alkaline-catalyzed transesterification. Using this pre-treatment process results in fuel that meets ASTM specifications for acid value. For more information, see Biodiesel Production from Oils and Fats with High Free Fatty Acids.

While the acid pre-treatment is effective in reducing FFAs, the acid can cause damage to metal tanks. Use tanks coated with teflon or plastic or invest in super-alloy tanks.

This technique was used to set up a pilot plant in Nevada, Iowa, to process high FFA feedstock into biodiesel. For more information, see A Pilot Plant to Produce Biodiesel from High Free Fatty Acid Feedstocks.

An alternative process called “glycerolysis” can be used with feedstocks containing more than 10% FFAs. This involves adding glycerin at 400°F and letting it react with the FFAs to form monoglycerides, a glycerol molecule to which one free fatty acid has been joined. These monoglycerides can then be processed using a standard alkaline catalyst transesterification process.

Waste glycerin from biodiesel processing can be used in this process.

Glycerolysis can be expensive because of the high heat involved, which requires a high-pressure boiler and trained boiler operator. Also, vacuum must be applied while heating to remove water that is formed during the reaction.

Another disadvantage is that the glycerin will also react with the triglycerides in the oil to convert some of them to monoglycerides. While this does not negatively impact the reaction, it means that more glycerin is required for the process, and therefore more glycerin must be removed at the end of the transesterification.

The use of solid acid catalysts is a relatively new technology in biodiesel production. Solid acid catalysts are packed in a canister. As a mixture of oil and alcohol flows through this canister, the FFAs are converted to esters. The advantage of this process is that the acid does not contaminate the oil and therefore does not need to be removed at the end.

However, a disadvantage is that contaminants in the oil such as water and phosphorus can foul the catalyst and prevent it from reacting with the FFAs. One solution is to install a guard column in front of the acid catalyst canister to remove contaminants from the oil.

Even with a solid catalyst, water is formed by the esterification reaction and will contaminate the excess methanol that is used to force the chemical equilibrium to give a complete reaction. To be economically viable and environmentally sustainable, this methanol must be recycled, which requires a distillation process to remove water.

Another option is currently under development for processing high free fatty acid feedstocks. This option involves performing the reaction under supercritical conditions (275° to 325°C and high pressure). At high temperature and pressure, the reaction does not require a catalyst, so soap formation is not a problem. Water also does not appear to inhibit the reaction. Both free fatty acids and triglycerides react easily, so there is no need to separate these materials before processing. In fact, even very low quality feedstocks can be processed successfully.

However, the high reaction pressure requires heavy-duty reaction vessels. The reaction conditions are so extreme that many side reactions can occur which produce undesired products. The formation of these non-ester compounds means that the final product will probably need to be distilled to meet ASTM quality requirements. In addition, another drawback is the extra energy needed to achieve and maintain the high temperature.

In spite of these concerns, this method is of interest because it allows processors to make use of low-cost feedstocks such as trap grease.