Castor bean (Ricinus communis L.) has been used for many years as an industrial oilseed crop because of its high seed oil content ( ~50%), unique fatty acid composition (high in ricinoleic acid)and lubricity, potentially high oil yields (from <100 to >250 gallons/acre have been reported), and its ability to  grow under varying moisture and soil conditions. Castor’s use is limited to some extent because the unprocessed seed contains a highly toxic protein—ricin. Nevertheless with appropriate processing and handling along with new efforts to breed ricin-free seeds, castor holds promise as a biodiesel fuel along with its current industrial and pharmaceutical uses.

Current Potential for Use as a Biofuel Feedstock

The overall major constraint for using castor oil as a feedstock for biodiesel is not its physical and chemical properties but the high price paid for castor oil as an industrial and pharmaceutical feedstock. Due to its high lubricity characteristics, biodiesel derived from castor oil could achieve the required lubricity for biodiesel standards at concentrations much lower than that of rapeseed (Brassica napus L.) or soybean (Glycine max L.). However, the high viscosity may limit its use to lower percentages in biodiesel blends or to warm climates. 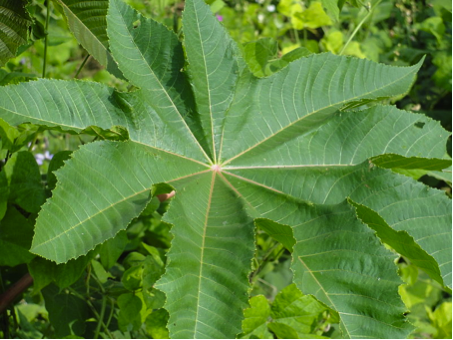 Castor is a member of the Euphorbiaceae family that is found across all the tropical and semi-tropical regions of the world with the major producing countries being India, China and Brazil. There are two main types of castor plants– giant (tree-like) and dwarf (tall shrubs), although crossing and breeding have resulted in a wide range of sizes and types (Figure 1).  Leaves are normally large, lobed and palmately arranged (Figure 2). Castor is a perennial dicot plant that is monoecious (has separate male flowers and female flowers interspersed on a raceme-Figure 3). The fruit is a globular spiny capsule with three multicolor (cream, brown, black, red) variegated seeds (Figures 4). In addition to the approximate 50% oil content, the seed also contains the toxic protein ricin, which must be removed. 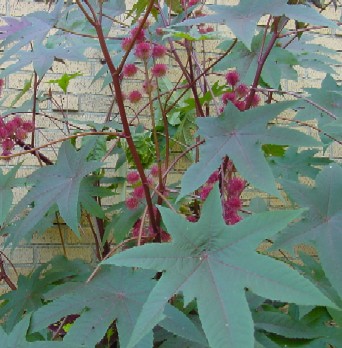 Castor seed is typically planted about 1 ½ to 2” deep in rows 2 to 6 ft wide depending on plant canopy size and type and harvest method. Plant populations can range from less than 5000 to more than 25,000 plants per acre for large or dwarf types, respectively.

Soil pH should be around 6.0 with moderate levels of fertility and applications of about 60-70 lbs nitrogen/A. Castor is not tolerant of saline (Na) conditions.

Weeds are a problem early because of the slow germination and growth. Gray mold, vascular wilt and charcoal rot are the most common diseases worldwide. Nematodes can cause problems also. A variety of common U.S. crop insects in the larval (caterpillar) stage and insects like stink bug and leafhoppers can cause damage as can castor-specific insects.  Many of the current pesticides available are effective on these pests but may not be legally registered for use in castor.

Machine or hand harvesting can start as early as 6-8 months after planting. Shaker type mechanical harvesters can start before the seed is fully dried on the plant to avoid shattering, thus the seed needs to be dried for a short while before storage and/or threshing and processing. For processing, seeds are dehusked and the oil is either mechanically expelled (hydraulic or screw) and/or extracted with chemicals. Conversion to biodiesel requires some modification of the standard transesterification process used for soybeans. The oil is high in ricinoleic acid and has a much higher viscosity than other plant oils. 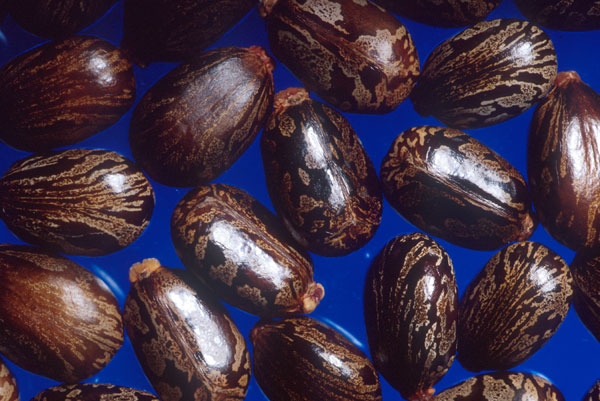 Developing new cultivars that have desirable growth habits and canopy structure for mechanical harvesting will allow increased acreage. Breeding ricin-free cultivars along with modified oil profile characteristics to enhance processing and use will overcome current limitations. Further evaluations of fertility needs and plant spacing/population could enhance yields. Improving the quality of the meal residue could make it useful as a livestock feed and enhance the economic value of the crop.