Can corn cobs be a viable biofuel feedstock in the US? Learn about the use of cob and husk materials in cellulosic ethanol, co-firing, and gasification projects. New harvesting technologies reduce production costs and make the economics more attractive for this biofuel energy crop.

Corn cobs were once viewed as an important biofuel feedstock early in U.S. history to heat houses, farm buildings, and small businesses. However, with the advent of combines, which left the cob in the field, the use of corn cobs as a biofuel declined dramatically. Corn cobs are used on a limited basis for industrial purposes in the United States for bedding, oil sorbents, polishing agents, and other uses. Now, corn cobs are reemerging as a potential biofuel feedstock for direct combustion, gasification, and cellulosic ethanol and appear to have numerous advantages over many competing feedstocks.

Corn cobs are dense and relatively uniform, and they have a high heat value, with low N and S contents, and can be collected during corn grain harvest. Harvesting cobs has little potential impact on soil residue, soil carbon, or the nutrient requirements of subsequent crops. Corn cobs appear to be a relatively sustainable, but relatively low-yielding, feedstock that can be used effectively in cellulosic ethanol, gasification, or co-firing applications. Two of the limiting issues are the need for a significant local resource base and the development of harvesting equipment, which is compatible with current corn-harvesting systems.

Current Potential for Use as Biofuel

Corn cobs are currently being used for heat in some parts of Europe, while in the United States, this feedstock is rapidly being developed as a feedstock for cellulosic ethanol, co-firing, and gasification projects. As a direct heat source, corn cobs have a heat value of about 18.4 to 18.7 MJ/kg or approximately 8,000 Btu/lb. Poet Energy constructed a corn-cob cellulosic biofuel demonstration plant that has produced ethanol at a cost of $2.35/gal. Poet has also been instrumental in working with equipment manufacturers and farmers to conduct harvesting studies and develop new cob-harvesting equipment and supply chain logistics. Corn cobs are also being used as feedstocks for gasification in projects like the one ongoing at the University of Minnesota at Morris. [1]

One of the advantages of corn cobs as a biofuel feedstock is that they are a by-product of corn grain production, and no additional production inputs are required above those needed for cob collection and transport. On a dry matter basis, cob yields average about 14% of grain yields and represent about 16% of the total stover biomass in a field. Cob moisture is a logistical and storage challenge as cobs are typically wetter than the corn grain. At corn grain moisture levels of 20%, cobs may still be retaining 35% moisture. 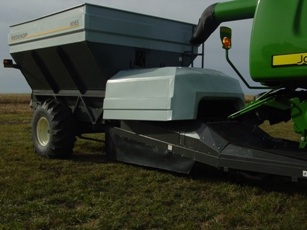 The main drawback of harvesting cobs is the collection activity competes with other fall field operations and may require investment in additional forage-handling equipment. However, equipment innovations are being developed to minimize disruption of grain harvesting. 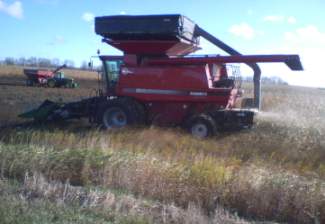 Other new methods collect all of the stover exiting the combine and then separate cobs from other corn stover (husks, etc.) in a collection wagon pulled behind the combine.

Now that Poet and other corn cob processors have gained experience from their demonstration plants, cob and stover mixes are actually preferred. Poet is now contracting with producers to supply cobs plus stover up to 25% material other than cob (MOC) based on dry weight. This has led to the development of new systems that directly bale all material exiting the combine. 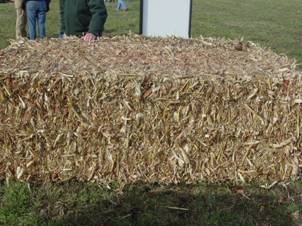 In one study, cob yields at N rates typical of production fields ranged from 0.6 to 1.2 tons per acre (1.4 to 2.2 Mg/ha). In an Iowa State report, corn yielding 161 bushels per acre produced about 1,200 pounds of cobs per acre.[2] A general rule is that cobs represent about one-third of the volume of corn grain harvested.

The relatively low yield of cobs per acre poses a logisitical handling and transportation problem, compared with other feedstocks. As a result, biorefineries or other processing plants will need to draw feedstock from a much larger area than they might for other feedstocks. Nevertheless, in some regions with intensive corn production, cobs could provide a substantial amount of feedstock. One proposed facility, the Chippewa Valley Ethanol Plant, projected a 2009 cob harvest of 6,000 to 8,000 tons from 12,000 to 14,000 acres.

Farmers will have to carefully evaluate the economic returns from gathering and supplying corn cobs to a biofuel plant. While new collection systems minimize harvest disruption, additional time must still be devoted to the activity. Moreover, additional investment may be required. New cob-collection machines cost $130,000 or more. Producers may consider joint ownership of these machines, or custom hiring, to reduce fixed ownership costs of depreciation, insurance, and financing. For example, if cobs are valued at $50/ton and the yield per acre is 0.7 tons/acre, gross revenue totals $35/acre. This revenue may or may not cover all harvest, transportation, and storage costs while leaving the producer with an adequate net return.

Corn cobs are traditionally purchased on the basis of weight and moisture. In gasification systems, cobs may be tested and purchased on their Btu value as well. Moreover, other quality standards will likely emerge, similar to No. 2 yellow corn, which place limits on foreign matter, dirt, purity, and spoilage. For example, Poet has proposed to contract with area farmers desiring to supply cobs and pay $55/dry ton, FOB their local plant, no dirt, rocks, or other foreign matter, with delivery scheduled through the year at reasonable notice to the producer.

One of the motivations for developing biofuels is to lower carbon emissions. While biofuel produced from cobs is expected to reduce overall emissions, the extra harvesting and transportation activities associated with cob collection compared to stover may partially offset these advantages. 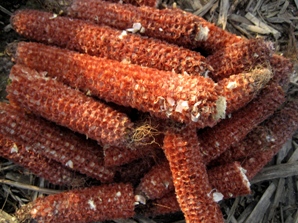 Corn cobs have the potential to be a sustainable biofuel feedstock. New harvesting technologies both reduce cost and minimize disruption with other fall field operations. While yield per acre is relatively low, production costs are also likely low, and the impact of cob harvest is minimal on the soil.