“Gear up and throttle back” is a fuel-saving practice suitable for light drawbar loads (less than 65% of full power) when reduced PTO speed is not a problem. For the most efficient operation, a tractor’s engine should be operated near its rated capacity. However, many field operations (such as light tillage, planting, cultivating, and hay raking) do not require full tractor power. This is especially true when older implements, which were sized for a smaller tractor, are used with higher horsepower tractors. Also, many operations should be performed at a fixed field speed. 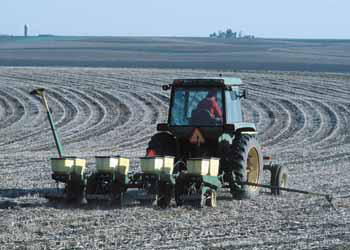 Gear up and throttle back when the field operation requires less than 65% of the tractor engine’s full power. Photo: Gene Alexander, NRCS, South Dakota

For these lighter operations, a substantial amount of fuel can be saved by shifting to a higher gear and slowing the engine speed to maintain the desired field speed; thus, the term “gear up and throttle back.” An example of this procedure is shifting a manual transmission car or truck from second to third gear while reducing the throttle setting to maintain travel speed. The goal of gearing up and throttling back is not to increase operation speeds or to do work more quickly but to save fuel.

General Guidelines for Gear Up and Throttle Back

Normally, “gear up and throttle back” can be used when loads require less than 65% of a tractor’s power. It is generally safe to reduce engine RPM by 20% to 30% of the rated RPM. Check the operator’s manual for specific recommendations for your tractor.

There is no justification for operating either turbocharged or naturally aspirated engines at full throttle when full drawbar horsepower is not required.

Most tractor manufacturers indicate that the “gear up and throttle back” practice is suitable for their tractors and recommend the practice for fuel savings. Further, this practice could decrease maintenance, downtime, and expenses generally incurred from over-speeding mechanical equipment.

Specific fuel consumption (hp-hr/gal) is not generally affected by engine size and can be used to compare the fuel efficiency of different sizes of tractors. Higher values of hp-hr/gal indicate greater fuel efficiency in the same way that higher miles per gallon indicate a better fuel economy for highway vehicles.

For diesel tractor engines, 13.5 hp-hr/gal would be an average fuel efficiency for drawbar loads, while a very efficient tractor can achieve 18.5 hp-hr/gal for loads on the PTO. Increased fuel efficiency is the advantage of “gear up and throttle back” practice.

There are a few drawbacks with “gear up and throttle back.”

Do Not Overload the Tractor

When using the practice of “gear up and throttle back,” the most important thing to remember is NOT to overload or lug the engine. Overloading the engine requires the engine to produce more torque at a low engine speed than it is designed for. Excessive black exhaust smoke is one indication of an overloaded diesel engine.

Remember, fuel consumption and specific fuel consumption can vary widely for individual tractor models. Consult University of Nebraska Tractor Test Reports for your specific tractors when making an efficiency selection. Keep accurate records of the fuel usage of all tractors under a variety of operating conditions. With accurate records, an equipment system manager will be able to select the most economical tractor for a specific operation.

The fuel saving practice of “gear up and throttle back” involves reducing engine speed to 70% to 80% of rated engine speed, and shifting to a faster gear to maintain the desired field speed and implement productivity. This practice is suitable for light drawbar loads (less than 65% of full power) when reduced PTO speed is not a problem. Remember, DO NOT overload the engine.

If you “gear up and throttle back” whenever possible, you will be on your way toward getting the most for your fuel dollars.