Soil and water below ground contain a vast reservoir of thermal energy. Geothermal heating systems recover this energy and convert it to heat that can be utilized in greenhouses and other buildings. Geothermal heat resources can be classified into three categories: low, medium, and high temperature.

In most areas of the country the economical choice for geothermal heating is with low temperature heat, because it offers a reasonable payback, typically ten years or less, depending on the system design and the cost of fossil fuel replaced. Before considering the installation of a geothermal system, it is important to carefully calculate the estimated payback for your situation, and to implement energy conservation measures that usually have a payback of just a few years. These include: reducing air infiltration, installing energy curtains, insulating sidewalls and the foundation perimeter, making good use of growing space and installing electronic environmental controls. These measures should be done first since they can considerably reduce heat loss and thus reduce the size of the geothermal heating system needed to heat the greenhouse. 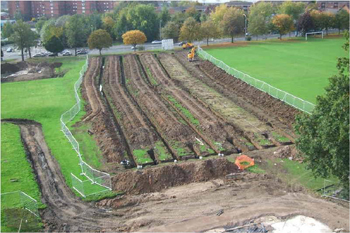 Trenches are excavated to install tubing that will collect heat from below ground. Photo: John Bartok, Jr., University of Connecticut

Earth tubes are piping that is buried 6 to 12 feet below the soil surface. The simplest and least expensive systems gather heat during the winter by drawing air through corrugated plastic tubes and direct it into the space to be heated. The air passing through the tubes is warmed by the soil that has a higher temperature than the air. During the summer the system can be used to cool building space by drawing outside air in the greenhouse through the buried tubes. The heat is absorbed by the cooler earth.

For example, the average soil temperature 8 feet below the surface in central Massachusetts varies between 60°F in early Fall to 46°F in early March. To increase the temperature to between 80°and 90°F for air heating for ornamentals or bedding plants, an air-to-air heat pump could be employed. The heat pump operates as a reversible refrigerator: it can heat or cool the air used to maintain the optimum growing environment.

Liquid systems typically utilize either the soil heat or heat from a well, pond, or other body of water to warm a liquid such as propylene glycol or methyl alcohol in a closed-loop system from which heat is extracted. 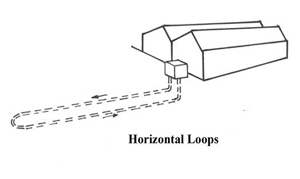 Where adequate land is available, horizontal loops may be used to capture heat from the gound. Pipes are placed in trenches in lengths up to 400 feet. Multiple loops are used to capture the amount of heat needed to heat the greenhouse(s).

Vertical loops are an alternative where land area is limited. In this case well-drilling equipment is used to bore small diameter holes from 75 to 500 feet deep. The hole may be filled with a grout to transfer the soil heat to the pipes.

Closed-loop systems circulate an antifreeze solution through loops of small diameter underground pipes. In cold weather this solution absorbs heat from the ground and carries it to a heat exchanger that extracts the heat. The solution may also go to a heat pump that amplifies the temperature increase.

Closed loop systems using pond or lake loops are economical to install when a body of water is nearby. This system eliminates the excavation cost. Antifreeze is circulated through coils of pipe that are placed in the bottom of the pond or lake. A depth of at least 12 feet is needed to avoid the influence of the freezing that occurs on the surface during the winter. The pond or lake volume should be large enough to absorb the energy needed for heating, or the energy released by cooling, without significantly impacting the pond/lake water temperature.

Open loop systems utilize ground water directly. Water is usually pumped from one well and returned to a second, adjacent well. The distance between wells has to be far enough so that the return water doesn’t influence the intake water. The water may also be pumped out of a pond or lake at one location and returned a distance away. Open loop systems can be economical if the source of water is located nearby.

Today’s geothermal equipment is more reliable at a lower cost than a few years ago. That, plus recent volatility in fossil fuel prices, have made the use of geothermal heat increasingly popular for residential and commercial applications. Due to the higher temperatures typically needed for greenhouse heating, a heat pump may be required with geothermal systems. Where low temperature heat is needed, such as maintaining an air temperature just above freezing, direct use of the heat is possible.

As the cost of fossil fuels increases, the payback for alternative heating systems shortens. For most geothermal systems the payback is typically less than ten years with energy prices at $25/MBtu (equivalent to #2 fuel oil at $2.50/gal). In some cases it can be significantly better than that, in the range of 3 to 7 years, dependong on the geothermal source, cost of the system, and quantity of fossil fuel displaced.