The USDA-ARS FarmBio3 project explores whether on-farm fast-pyrolysis processing units could be a component of an efficient and cost-effective decentralized system of biofuel production and processing. 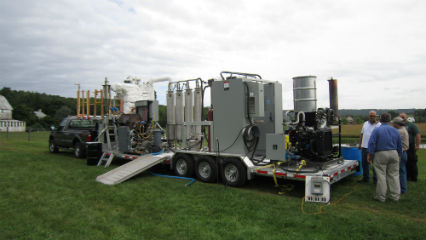 Fast pyrolysis—heating organic material at high temperatures (between 450 to 500 C) in the absence of oxygen—is a promising method of processing biomass into useful renewable energy, especially as a “drop-in” substitute for petroleum-based fuels such as gasoline. Locating pyrolysis processing directly on farms that feed a local biorefinery could accomplish several things, including shortening the distance that feedstocks must travel for final refining, reducing the prohibitive costs of transportation, and producing electricity for these farms. However, this system poses challenges that must be confronted, two of them being feasibility and practicality.

A research project now underway will demonstrate how on-farm processing could be part of a decentralized system of biorefineries located in villages, which are efficiently supplied with bio-oil from feedstocks grown and processed on surrounding farms.

Akwasi Boateng, lead scientist at the USDA Agricultural Research Service’s (ARS) Eastern Regional Research Center in Wyndmoor, Pennsylvania, and his team hope to demonstrate how the fast pyrolysis method of processing biofuel can be employed at an efficient and useful scale in farms and villages using common agricultural feedstocks. In this scenario, growers turn switchgrass and other feedstocks into crude bio-oil, which they deliver to a central refinery with minimal transportation costs.

Boateng and a consortium of other researchers from academic institutions and private companies are setting up a demonstration project, called FarmBio3, to find out if the system is affordable and easy for growers, and whether it could ensure biorefineries a steady supply of biofuel.

Through FarmBio3, a three-year on-farm demonstration project funded by USDA’s National Institute of Food Agriculture, Boateng and his colleagues will locate a mobile fast-pyrolysis unit on at least five farms in Pennsylvania’s Delaware Valley, where producers have been growing switchgrass for the past five years. The fluidized-bed pyrolysis technology was developed by Boateng and his team at the USDA-ARS, who hope it will be commercialized by industrial partners in the region.

This unit produces pyrolysis oils that are deoxygenated in order to increase the heating value, and can process two tons of biomass feedstocks into approximately 300 liters of high-quality (gasoline equivalent) fuel per day. The unit is designed to be mobile, so it can be easily moved to a biomass source.

Boateng visualizes a practical, real-world system where instead of shipping biomass to large, central plants (most ethanol plants, for instance, typically process as much as 2,000 tons per day), several pyrolysis units would be located around a small radius of, perhaps 25 miles, near the biomass source. The pyrolysis oils could then be transported to a more central biorefinery.

Two other parts of the research project using different feedstocks will be conducted at:

Over the next year, Boateng and his colleagues will collect data from the farms. In addition to the technical issues of how a fast-pyrolysis system functions at the farm level, the information will help to answer the following questions:

The data can be used in a life cycle assessment of all environmental impacts of the process, and could lead to commercialization.

The fast-pyrolysis method of processing feedstock is a fairly simple process that produces high yields of crude bio-oil that are easy to store. Apart from bio-oil, fast pyrolysis produces valuable by-products such as biochar and charcoal, which are excellent soil amendments, and synthetic gas (syngas, composed of carbon monoxide, carbon dioxide, and hydrogen), which can be used as a fuel source or to produce other chemicals. Because the process can be deployed on a small scale, it could be an efficient part of a decentralized system of producers and processors.

On the downside, because of its relatively high oxygen content, bio-oil created by fast pyrolysis is typically unstable and has only 50 to 75% of the heating value of petroleum-based fuels. However, the type of feedstock used can help stabilize bio-oil: a biomass with high protein content reduces the oxygen content. Meanwhile, technologies that make bio-oil more stable for woody or herbaceous biomass materials (such as switchgrass and corn stover) are being refined. Boateng’s team is working on the development of catalysts which, added to the pyrolysis process, can reduce the oxygen content. The USDA-ARS has also modified the pyrolysis method with a process called Tail Gas Reactive Pyrolysis, which removes oxygen from the finished bio-oil without using a catalyst.

Why This Is Important

Fast pyrolysis is one of the methods that researchers have been pursuing to convert biomass into energy-dense liquid hydrocarbons. The Renewable Fuel Standard established by the U.S. Congress in 2007 set a goal of deriving 30% of U.S. oil consumption from renewable energy by 2022. At the time, cellulosic ethanol, mostly from corn, was considered the potential primary source of that energy. But when it became clear that corn ethanol would be unable to fulfill the mandate, the U.S. government began developing other renewable fuels, such as switchgrass and other perennial grasses, which can be efficiently processed by fast pyrolysis.

Any successful biofuel will have to be profitable for farmers to grow, easy and affordable to process, and result in a product that is useful, efficient, and priced competitively with other fuels. The goal of the FarmBio3 project is to help prove whether farm-scale pyrolysis processing systems can help meet some of those important criteria.

The FarmBio3 project will demonstrate whether a fast-pyrolysis method of processing biofuel from common agricultural feedstocks can be employed at an efficient and useful scale in farms and villages—one that will be affordable and easy for growers to use, and provide biorefineries with a steady supply.

Contributors to This Research Summary