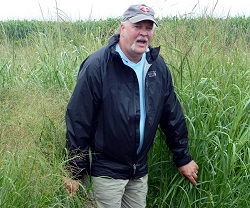 Identification of gene pools and their geographic patterns will help in the development of new switchgrass varieties for biofuels, and for ecosystem services such as conservation and restoration. Identifying these gene pools relies on answering several questions: Where did the remnants of the genotypes originate? How much genetic diversity do they contain? Has there been transfer of genes between the genotypes?

Glaciation that covered much of the northern United States during the last ice age removed all vegetation and buried seeds under tons of silt and rock from a large portion of the country. When the glaciers retreated, plants returned to this region but with some distinct patterns.

Michael Casler, a research plant geneticist for the USDA’s Agricultural Research Service and CenUSA collaborator, and his colleagues are developing a system of classifying gene pools of switchgrass that could provide germplasm for improvement of varieties for biofuels and ecosystems services.

For a bioenergy crop, high yields of biomass, which rely on traits such as height, tillering capability, persistence, and resistance to disease and insects, is the most important improvement they could provide. The desirability of other traits, such as efficient fermentation or high energy content, would depend on the intended final biofuel product.

Adaptability to marginal soils and conditions is also an important goal for improved varieties. A sustainable bioenergy production would not compete with food crops but would utilize land impractical for producing food for humans. Through DNA research, the researchers have identified the origins and the genetic diversity of the two switchgrass ecotypes, upland and lowland, in their native habitats. Because the two ecotypes are adapted to different environments, that identification is important in the classification of gene pools. 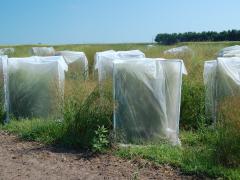 Casler and his colleagues took 384 samples of leaf tissue from remnants of both upland and lowland switchgrass varieties that are being used at USDA’s Agricultural Research Service’s Dairy Forage Research Center in Madison, Wisconsin, and the University of Georgia to breed improved varieties of switchgrass for biofuels. Using flow cytometry, they looked at plant DNA and did DNA sequencing of some samples to identify which genetic pool they belonged to.

In a related research project, Casler and his associates did DNA sequencing on 480 plants to look at possible gene flow between upland and lowland ecotypes.

Casler’s research identified eight gene pools of switchgrass across the United States that could be a rich source of germplasm to improve commercial switchgrass varieties for biofuel, and in restoration and conservation work. These gene pools harbor a great deal of genetic variety, a potential source of new varieties that can respond better to climate change and improve germplasm.

As the climate gradually warmed after glaciation, “what was left behind may have been a very close representation to what survives today – hundreds to perhaps thousands of small, fragmented populations of switchgrass, representing a huge array of genetic and phenotypic diversity” [2].

Research has turned up several other discoveries:

Why is This Important?

The strong diversity and wide adaptation of switchgrass is good news for those developing new commercial varieties of the perennial grass for bioenergy. Improved varieties would produce more biomass for biofuel production.  Through adaptation to a single annual harvest, switchgrass will be more useful for commercial bioenergy production and harvest. If that harvest is delayed until after post-senescence dry-down, more nutrients will be recycled back into the plants’ roots.

Switchgrass diversity is also a benefit for those working in conservation, who need not be so limited in the varieties they can use. “We’ve been trying to help people working in restoration and conservation of prairielands to define what ‘local’ means,” Casler said. “What we’ve found and other studies have found is that “local”, from a practical standpoint is pretty broad. If I’m trying to restore a native prairie in central Iowa, then germplasm from eastern Nebraska to eastern Indiana is going to work without any problem at all.”

The genetic diversity of plants from different sources across a wide geographic area will also help growers with switchgrass production on marginal lands, and to better respond to climate change.