On-farm biogas production has long been a topic of interest for farmers, with historical records of biogas production going back several hundreds of years. In modern livestock production systems, for example, the benefits of producing biogas are significant and include:

The economics of biogas production, however, are sometimes difficult to justify unless the accompanying environmental benefits and other by-products are considered.

What Is a Biogas?

Biogas is a by-product of the anaerobic (without oxygen) breakdown of organic matter. The organic matter could be any of a number of materials, but on the farm, it most often comprises animal manure or other agricultural waste.

The most important component in biogas is methane, a flammable gas that can be used in furnaces, for cooking, or even as an engine fuel. However, biogas also contains carbon dioxide and small amounts of hydrogen, hydrogen sulfide, nitrogen, and water vapor.

What Is a Digester?

Today, farmers in developed countries are using digesters primarily to improve the quality of their manure and to reduce manure odors, the energy content of the methane being simply a by-product. However, as the price of energy increases, more farmers are looking at using anaerobic digestion as a way to generate supplemental heat and electricity for their farms. Digesters are a popular technology in rural areas of the developing world, where electricity and petroleum fuels are often unavailable or unaffordable. 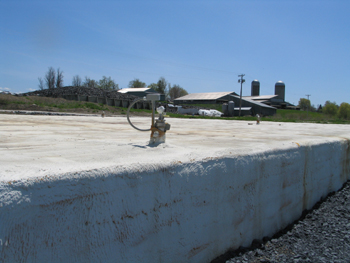 This is a 600,000-gallon plug-flow digester that creates biogas using the manure from 1,000 dairy cows.

Physically, digesters can come in many different shapes and sizes, varying from simple earthen lagoons to complex steel and concrete structures. In North America, the most common commercial farm digesters are usually buried concrete tanks with heavy plastic covers.

How Does a Digester Work?

Fresh biomass entering a digester is supplied with anaerobic bacteria by the existing digested biomass, which is tremendously rich in these microbes. The digester tank provides a conducive environment for anaerobic microbes to “digest” the biomass, resulting in digested solids, liquids, and biogas. In general, the anaerobic digestion is a living process, requiring favorable conditions (temperature, moisture content, oxygen exclusion,and pH) and a steady food supply in order to flourish. 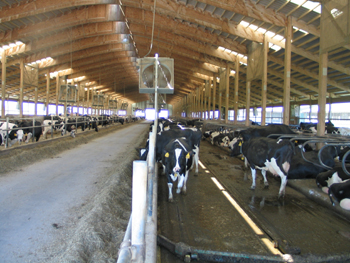 Manure from this dairy barn is automatically collected and delivered to a nearby anaerobic digester.

What Goes into a Digester?

Livestock manure is the most popular material, or feedstock, for anaerobic digestion on the farm, but almost any type of organic matter can be digested, including food waste, forestry residue, animal processing waste, and field crops.

What Can Go Wrong?

Probably the biggest problem in a digester occurs when the digester’s pH drops too low. In general, acid-forming bacteria grow much faster than methane-forming bacteria. This can reduce the pH to an unfavorable level for methane-forming bacteria, thus inhibiting the activity of methanogens. This is referred to souring and may result in failure or crashing of the anaerobic digester. In most cases, however, the pH is self-regulating, but bicarbonates are sometimes used to maintain consistent pH. The optimal pH range is between 6.8 to 8.5. Restarting a digester that has “soured” is not an easy task. Typically, the approach is to open the digester, excavate the soured material, then refill and restart the digester. This is a costly and unpleasant task and should be avoided whenever possible.

There are safety risks in dealing with biogas, including explosion, asphyxiation, disease, or hydrogen sulfide poisoning. Operators must be aware of the potential hazards and take preventative measures.

How Is Biogas Used?

Biogas generated from anaerobic digestion processes is a clean and environmentally friendly renewable fuel. There are many uses for this fuel, including use in engines, generation of electricity, heat and hot water systems, and even refrigeration. 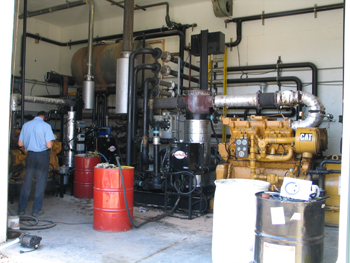 This generator makes electricity using biogas from a digester on a 1,000 cow dairy farm.

Other Articles About Anaerobic Digestion

Find these topics and many other related Farm Energy media resources at the Farm Energy Media archive.

Contributors to This Document