U.S. farms and forests have the potential to supply enough biomass to meet the Renewable Fuels Standard and replace more than a third of petroleum use with bioenergy by 2030, according to the U.S. Billion-Ton Update. 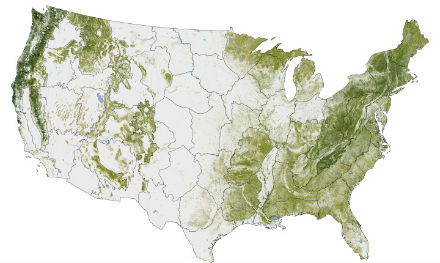 NASA Earth Observatory: Where The Trees Are. Photo: Wikipedia.

The United States can supply more than enough biomass feedstock to meet the 2022 renewable energy goals mandated by the Renewable Fuels Standard, according to the U.S. Billion-Ton Update: Biomass Supply for a Biofuels and Bioenergy Products Industry. Dedicated energy crops (non-food crops grown specifically for energy production), which are a small part of renewable energy sources today, may become the largest single source of that supply by 2022.

The Update revises the Biomass as Feedstock for a Bioenergy and Bioproducts Industry: the Technical Feasibility of a Billion-Ton Annual Supply, the so-called Billion-Ton Study (2005 BTS) released in 2005. The study was sponsored by the U.S. Department of Energy and prepared by the Oak Ridge National Laboratory.

While the 2005 BTS was a broad strategic assessment of the industry from 2025 to 2050, the Billion-Ton Update focuses on the time period 2012 to 2030, and goes much further in providing a comprehensive assessment of resources and feedstock prices, county by county, to reinforce the conclusion of the 2005 BTS.

The Renewable Fuels Standard (RFS) was created in 2005 and updated in 2007 as part of an effort to promote the use of renewable energy in the United States by mandating that a certain amount of transportation fuels sold in the country be from renewable sources.

An In-Depth Look at the One-Billion Ton Goal

The 2005 BTS was prepared for the U.S. Department of Energy and the U.S. Department of Agriculture, which collaborated to expand biomass as a source of renewable energy. As part of that effort, a congressional committee projected replacing 30% of U.S. oil consumption with biofuels by 2030. The BTS analyzed whether farm and forest resources in the United States could sustainably supply about 1 billion tons of biomass annually—an amount that would be sufficient to replace about 30% of the country’s petroleum consumption.

The Billion-Ton Update of that study benefits from economic modeling and refinement of variables, and also applies economic assessments such as supply/cost curves for each major feedstock. It better accounts for sustainability factors such as organic matter in soil.

The Billion-Ton Update breaks down its analysis into two categories of potential biomass resources: forest-based and agricultural. Like the 2005 BTS, it analyzes those biomass resources only as they are available at the farmgate, not upon delivery to biorefineries. For example, it does not analyze how much biomass might be lost during handling and storage, nor does it include transportation, preprocessing costs, or conversion operations. 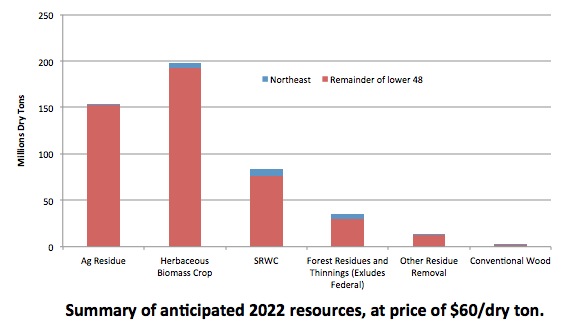 Economics: The Impact of Price

The economics of biomass feedstocks are an important addition in the Billion-Ton Update, especially for agricultural resources. In 2030 under the baseline yield scenario, farmgate prices of $40, $50, and $60 per dry ton are projected to produce 243, 551, and 767 million dry tons, respectively (see Table 6.1). In its analysis, the Update identifies $60 per dry ton as a “realistic, reasonable” price for most feedstock quantities.

While the report finds that yield increases are a significant factor in the future availability of biomass, an even larger driver is the farmgate or roadside feedstock price, which is the price producers receive. A price point of particular interest is the $60 per dry ton mark, above which producers may be more likely to plant energy crops; indeed, modeling shows these crops becoming notably more dominant on the landscape under such a scenario. As farmgate price rises, producers would shift more land into growing those crops (see Land-Use Change below). Energy crops might be the largest potential source of bioenergy feedstock in the future if a market can offer a farmgate price of at least $60 per dry ton.

Two Scenarios for the Future

The Billion-Ton Update lays out two scenarios for future availability of biomass. One assumes that current production trends will continue—the baseline—and the other, the high-yield scenario, assumes higher yields of biomass feedstocks, as quantified by experts at the request of the U.S. Department of Energy:

Here are summaries of the report’s findings for each scenario:

Under the baseline scenario at a simulated price of $60 per dry ton, the total potential biomass available today is estimated at 258 million dry tons, which would rise to 767 million tons by 2030.

The largest source of forest-based biomass would be logging residues and forest thinnings, though these supplies are not projected to grow over time. Conversely, the supply of energy crops and other agricultural-based resources are projected to grow with increasing yields and prices.

Energy crops play a very small role in today’s biomass supply. About two-thirds of the available agricultural biomass is from crop residues, such as corn stover, and one-third is from residues and waste from agricultural processing.

Under a high-yield scenario, agricultural resources, including residues and waste, together with energy crops would amount to 910 million dry tons by 2022. As with the baseline yield scenario, the contribution from energy crops rises with price. Realizing 37% of total available biomass, under the baseline at $60 per dry ton in 2030, energy crops would increase to more than half of total available biomass under the high-yield scenario at the same price and year. In addition to higher yields and better prices, part of that projected increase is due to better modeling of land-use changes in the Billion-Ton Update’s analysis.

It is assumed that management-intensive grazing would mitigate lost forage from pastureland. This is a significant assumption that warrants further analysis.

The Energy Independence and Security Act targets the production of 36 billion gallons of gasoline a year (BGY) from renewable sources by 2022, including 21 BGY from cellulosic biofuels under the RFS. Even under the U.S. Billion Ton Update’s baseline scenario at $50 per dry ton, the U.S. forest and agriculture industries are shown to produce over 400 million dry tons by 2022, more that the estimated 325 million tons needed to reach the 21 BGY goal. Under the high-yield scenario, they could reach well beyond that mandate. However, to achieve that reality requires more research into, and implementation of, the factors that most strongly influence potential supply of the resource: higher crop yields and innovation in production, management, and technology.

The U.S. Billion-Ton Update bolsters the conclusions of the 2005 Billion-Ton Study, finding that the United States has the resources to meet the RFS mandate for 2022 and could replace at least 30 percent of its petroleum use with renewable biomass by 2030. Even under current projections, it could provide the feedstock for the production of biofuels required by the RFS, and go well beyond that if higher yields of corn and energy crops are attained.

That result is not a given, however. Issues surrounding price and land-use change need to be taken into account. The fact also remains that, at this time, the market to purchase and process all the potential biomass resources into biofuel does not exist.