Learn all about biochar–what it is, and how it benefits soils and the climate by sequestering carbon.

Biochar is charred biomass, which is added to soil to improve soil health and soil quality. The solid, charcoal-like substance is created using a process known as pyrolysis, which is basically the heating of biomass to a high temperature (>400° degrees C) in the absence of oxygen. The addition of biochar to soils is actually an ancient technique that was used by early civilizations to enhance soil productivity.

The potential importance of biochar was recognized when anthropologists discovered dark, highly fertile soils in the middle of the Amazon rain forest. It is speculated that thousands of years ago, farmers living in the Amazon engineered the terra preta soils (called “terra preta,” or “black earth” in Portuguese) by adding biochar along with fish bones and other organic residues to the otherwise infertile soils. Similar soil enhancement practices have also been discovered by early farming cultures in Japan, South America, and Africa.

The biochar-enriched soils have been shown to have significantly higher organic carbon content, higher water-holding capacity, higher nutrient holding capacity, and lower nutrient leaching rates compared to adjacent soils that have not been amended with biochar.

How is Biochar Produced? 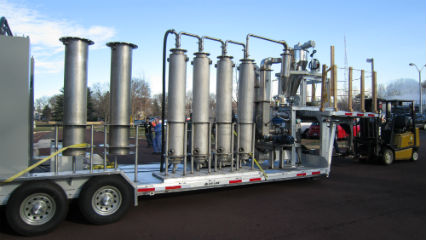 Pyrolysis rapidly heats biomass in the absence of oxygen, driving off hydrogen and carbon monoxide and turning the residue into biochar, a carbon rich solid. This process also releases a mixture of volatile gases that can be captured and condensed into an energy-dense liquid known as bio-oil, which can be refined into diesel and other hydrocarbon products. Biochar can be made from any organic feedstock with high carbon content including perennial grasses, corn stover and trees.

There are different types of thermochemical processes including slow pyrolysis, fast pyrolysis, flash pyrolysis, and gasification. Each technique uses different temperatures, and lengths of heating and produces different quantities and qualities of the end products biochar, bio-oil and syngas.

What Are the Benefits of Biochar?

Soils are the basis of our food production system; they recycle waste products, store water between rains, and are a vast storage center for carbon, water and plant nutrients. Managing soils so as to build organic matter and enhance soil structure is important for maintaining soil productivity and sustaining many other important ecosystem services.

Biochar is a lightweight, highly porous material that acts as a soil-conditioning agent, reducing soil bulk density and improving aeration and water-holding capacity of soils.  Adding biochar to soil recycles nutrients that are removed from the soil when biomass is harvested.  This is because most of the nutrients contained in the harvested biomass are partitioned into the biochar during pyrolysis.  Potassium, calcium and magnesium are mineralized to carbonates (CO32-) in biochar, meaning that most biochars are liming agents and can partially replace the need for agricultural lime. 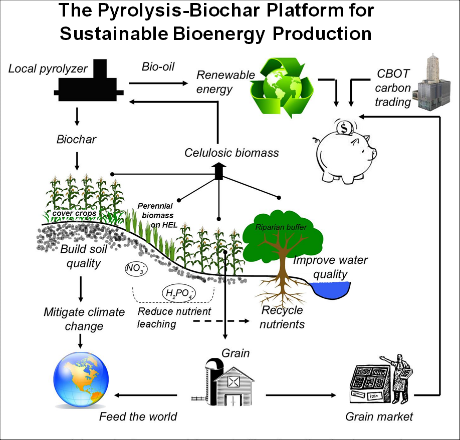 Research shows that biochar used as a soil amendment can improve crop yields grown in degraded soils (those that are eroded, sandy, or compacted. Biochar has also been shown to increase water and nutrient holding capacity of soils, reducing leaching losses of nitrate (NO3) by 10% and phosphorus (P) by 40-70% (Laird et al., 2010).  In theory, biochar amended soils should have greater nutrient use efficiency, lower leaching losses of nutrients and lower fertilizer requirements. This has yet to be demonstrated in field experiments.

Biochar is being evaluated as a tool for decreasing nutrient runoff. There are two aspects to consider. If adding biochar improves soil fertility and lessens the need for chemical fertilizers, nutrient runoff could be reduced. And if biochar-enriched soils can increase soil productivity, fewer acres of land would need to be put into production, potentially lessening row crop nutrient loading.

The earth’s natural carbon cycle is “carbon neutral.” As plants and trees grow and photosynthesize, they absorb carbon dioxide (CO2) from the air and store it in their tissue as carbon. When plants die they are oxidized, releasing carbon back to the atmosphere as carbon dioxide.

However, when fossil fuels are burned, this natural balance shifts, because previously stored carbon is released into the atmosphere.

The pyrolysis-biochar system is potentially ”carbon negative,” taking more carbon out of the atmosphere than it puts back into it. It has been shown that scaling-up such a system could be an important strategy for helping to mitigate climate change by storing plant derived carbon in the soil in a very stable form that resists decomposition (Woolf et al. 2010).

There is a growing interest in studying the carbon enhancing ability of biochar. In 2013, more than 380 peer-reviewed papers on this topic were published, an increase of nearly 500% since 2008 (International Biochar Institute, 2013). There is a growing consensus that soil biochar amendments are highly effective in removing CO2 from the atmosphere. However, the chemical properties of biochar and its net carbon footprint are widely variable and depend on a number of things, including the feedstock used, how it is made, and the resulting chemical composition.

How is Biochar Currently Being Produced and Used?

Today biochar is available in limited amounts, used mostly as a component of potting so soi soil in greenhouses and as a soil amendment for high-value horticultural crops and trees. The most economical sources for biochar are agricultural and forest residues (i.e. chaf, stover, bark, chips and slash); wood residues being the most common feedstock.

The western pine bark beetle infestation is creating huge new volumes of wood, and the U.S. Forest Service estimate that as much as 100,000 trees fall each day in Northern Colorado and southern Wyoming (USFS, 2011).

The State of the Biochar Industry

Today, approximately 150 companies, mostly small garden supply and specialty retailers, sell biochar worldwide. There are emerging opportunities, but overall the market is in its infancy, production is limited, and cost is at a premium.

A 2013 report by the International Biochar Initiative (IBI) provided a snapshot of the current state of the biochar economy. IBI conducts biochar field work on six continents, and provides free information to producers, gardeners and researchers. The report relied on survey data from 43 biochar companies along with other anecdotal and commercial information.

The report found that a majority of the global market share comes from the US (65%), followed by Europe (25%), Asia (7%), and Africa (3%). Ninety percent (90%) of commercial activity is focused on small specialty retail markets—mostly nursery and garden centers. A small percentage (10%) is focused on larger scale markets, such as agriculture or land remediation projects.  It has been reported that Japan has a growing commercial biochar industry, with approximately 15,000 tons traded annually (Okimori et al., 2003).

In the near term, due to price point, biochar will likely only be used in high-end specialty markets, but there is growing interest in developing biochar into new products that take advantage of its unique chemical properties. For example, today wastewater treatment facilities purchase thousands of tons of activated carbon annually to help absorb potential contaminants and reduce odors. Biochar has been shown to be a cost-effective alternative.

There is also growing in interest in using biochar to lessen non-point source pollution. In the Chesapeake Bay watershed, biochar-filled bioreactors are being set up along ephemeral streams to test their ability to filter out nutrients and improve water quality. The bioreactors are basically trenches filled with a mixture of biochar and wood chips. Groundwater moving through these trenches—or bioreactors—is helping to prevent nutrients from running into the creek. 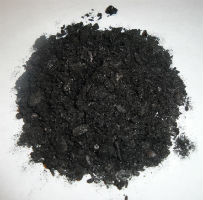 The CenUSA Bioenergy project is a USDA-supported research project that is investigating the creation of a Midwestern sustainable biofuels and bioproducts system. The project is using pyrolysis to produce bio-oil for fuel and biochar. Perennial grasses, compared to row crops, will help improve the sustainability of the Midwest cropping system by reducing agricultural runoff of nutrients and soil, and increasing carbon sequestration.

CenUSA Bioenergy is working on several projects pertaining to biochar. In addition to examining how it affects agricultural production, soil quality, and greenhouse gas emissions, they are studying its chemistry and exploring new ways to use biochar. Results shared at the 2013 annual meeting showed that continuous corn grown on soils amended in 2007 with 8.2 tons per acre biochar averaged 12 bushels per acre higher yields than control plots between 2008 and 2012; however the yield advantage for the biochar plots disappeared when 50 or 90% of the corn residue was harvested along with the grain.

CenUSA is working with Minnesota and Iowa Master Gardeners to see whether biochar could be a useful soil amendment for home gardens and a valuable commercial product for the horticulture industry. Every summer, 70 to 80 Master Gardener volunteers test biochar on demonstration garden plots that contain lettuce, tomatoes, peppers, beans, cucumbers, various flowers, and woody herbaceous plants. The 100 square-foot plots are divided into sections, each with a different amount of biochar applied: none (as a control), 150 pounds, and 300 pounds. Initial trials of biochar have shown an improvement in soil quality, although yield results have been mixed.

As companies expand production, the price of biochar should decrease and the use of biochar in agriculture could begin to be economical. If pyrolysis-derived transportation fuels become commercially viable, biochar would be an additional product and an additional profit center.

Any future market for carbon credits will require an effective system for auditing carbon sequestration credits. Near infrared spectroscopy, is an inexpensive and effective tool for measuring the amount of biochar in soil (Allen and Laird, 2013). The technique, used for decades as a quick and inexpensive way to test the quality of hay and other crops, can distinguish between soil organic carbon and biochar carbon.

Some Examples of New Biochar Companies

BioChar Now is a new Colorado based company that is making biochar from beetle-killed pine trees. The company was incorporated in 2011 with support from the Upstate Colorado Economic Development Corporation and a revolving loan fund. Biochar Now is focused on producing and marketing biochar for specialty uses: used by oil and gas industries to help capture pollutants, to help reduce and treat water pollutants and control odors.

Biochar Solutions, Inc. is a Colorado based company that is developing a distributed network of pyrolyzers for the production of biochar and bioenergy from wood waste.  The company works with biomass producers providing them with equipment, information and a network to offer wholesale distribution of biochar products.

Cool Planet – Disease infestation from the pine and spruce bark beetles threatens 42 million acres of US forests. Cool Planet is one of the first US companies to offer a reuse for this waste wood. Their business model uses pyrolysis to produce biofuels and biochar from wood, perennial grasses, and corn stover.

In 2013, Cool Planet announced plans to invest $168 million to build three commercial-scale biorefineries in Louisiana, each capable of producing 10 million gallons of fuel per year. This is approximately 100 times smaller than an average large biorefinery. Its first plant will rely on forest residues from yellow pine. The resulting biochar will be the first to be certified by IBI.

Cool Planet’s business model is based on developing small, modular plants that are “carbon negative” or that achieve a net reduction of greenhouse gases. Louisiana Economic Development reported that the projects will create 72 new jobs with an average annual salary of $59,600, and 422 indirect jobs. The construction phase will create an additional 750 jobs. Earlier, the USDA provided a $9.8 million grant to Colorado State University to work with Cool Planet to convert diseased wood (from the pine bark beetle) into fuel and biochar.