The end result of combustion is useful energy – typically in the form of heat, power, or both heat and power. This can be used to provide space heating for buildings, process heating for industrial needs, electricity for on-site use or sale to the grid, or the simultaneous generation of heat and electricity (so called “combined heat and power,” or CHP). Most commonly, the combustion heat is captured in the form of hot water, hot air or steam.

Most farms do not have significant needs for combustion heat, with the exception of farmstead heating during winter in cold climates. However, farms should consider the potential for providing combustion fuel to residential, commercial or industrial customers.

Combustion equipment is available in a variety of sizes and configurations, although the selection tends to be smaller than for fossil fuel combustion. It is usually more expensive than oil or natural gas-fired devices, but biomass fuel is usually less expensive – resulting in long term savings for the user. There are many examples of biomass combustion systems being used to heat greenhouses on farms. 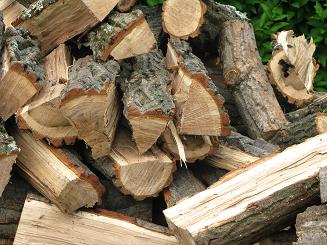 A fireplace is the most common form of residential combustion equipment – however, it also tends to be very inefficient (most of the heat is lost up the chimney). Many other types of stoves and furnaces are available that provide a higher efficiency method for using combustion heat in the home. Usually the equipment is suitable for only one type of biomass fuel, so it is important to select the appropriate stove for the fuel you wish to burn.

Wood Stoves are a more efficient means for burning wood – they control the rate of airflow and maximize the extraction of heat from the combusting fuel. However, these devices are generally suitable only for burning cordwood.

Fireplace Inserts are essentially just wood stoves that are installed in the opening of an existing fireplace. They perform much like a wood stove and have similar efficiency ratings.

Pellet Stoves are designed to combust specially-manufactured wood fuel pellets. These pellets are manufactured to careful specifications, which allows the stoves to operate more efficiently and burn more cleanly than typical wood stoves. Some pellet stoves are able to automatically feed fuel into the stove, which makes them a bit easier to use.

Biomass Stoves are designed to burn fuel pellets made from materials other than wood, such as wheat straw, corn stover, or grasses. Be sure to know the type of fuel that a stove is able to combust, as other fuel types could damage the stove or lead to an unsafe operating condition.

Corn Stoves – in some parts of the country, it is popular to burn shelled corn as a combustion fuel. In some ways, corn kernels are a naturally manufactured fuel pellet. Corn burns surprisingly well, but produces fairly high amounts of ash that is more prone to “slagging” (forming hard chunks) than wood ash. Unlike most other biomass fuels, corn contains measurable amounts of sulfur (~0.1%, which is still much lower than coal, for example). Therefore, wood-pellet stoves are generally not suitable for corn, and purpose-built corn stoves must be used instead. Some reports have suggested that corn stoves also work well for biomass, but check with the stove manufacturer to be sure. 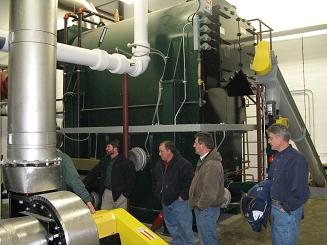 Commercial combustion equipment is larger and more complex than residential devices. Typically, the delivery of feed into the combustor is automated through the use of conveyor belts and/or augers. The flow of fuel and air is carefully controlled, and conditions within the combustor are automatically adjusted to ensure maximum efficiency. Advanced pollution control devices (typically a cyclonic separator as a minimum) are used to keep particle emissions within regulated limits for large equipment. 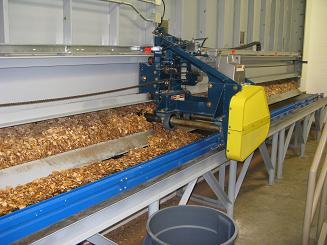 These systems are usually custom-built, based on the heating requirements and the available fuel. While most residential systems produce heated air, commercial-scale equipment is usually designed to produce hot water or steam.

The efficiency of combustion equipment is equal to the amount of useful heat produced divided by the total amount of heat available in the fuel.

The efficiency of a device depends on the quality of the equipment and the way that it is being operated. Most combustion equipment has the highest efficiency when it is being run at full output – efficiency drops off as the heat load is lowered. Typical full-load combustion efficiencies of different types of equipment are shown in the following table.

These efficiency values are based on the “higher heating value” of the fuel. Also keep in mind that the efficiency of these devices drops if the heat output is low – they are designed to operate best at peak or near-peak heat output.

Biomass is a relatively clean fuel, in terms of air pollution, IF it is burned efficiently. This may seem surprising to people who are accustomed to smoky fires or wood burners. However, the smoke from those inefficient systems contains large quantities of uncombusted fuel, which is a sign of low efficiency. High efficiency equipment generally has no visible smoke emissions and no detectable odor.

There are four main types of air pollution that can be produced by combusting biomass: 1) normal products of combustion (carbon dioxide and water), 2) “extra” chemical compounds formed during combustion, such as sulfur dioxides (SOx) and nitrogen compounds (NOx), 3) uncombusted molecules of biomass, such as soot, and 4) particles of ash that are small enough to float in the air (fly ash and particulates).

Carbon dioxide and water vapor are the two primary gases that are emitted from a combustor. Typical biomass combustion produces about 1.8 kg of CO2 and 0.5 kg of water vapor per dry kg of fuel.

Biomass combustion “smokestacks” often have plumes of white, billowy cloud rising from their tops. This is the water vapor in the combustion exhaust that is condensing into water droplets as it cools. Some people mistakenly think that the cloud above a biomass combustor is a sign of pollution; in reality, the gases from the combustor are often very clean.

While modern biomass combustors generally have low emissions when compared to many other fuels, there are some pollutants from biomass combustion that are of concern.

The main pollutants to be concerned about when combusting biomass are the oxides of nitrogen – NO2 and NO3. They are typically referred to as “NOx” emissions, and they form when nitrogen in the air chemically combines with oxygen during the course of combustion. NOx in the atmosphere can combine with water vapor to form nitric acid, and has been identified as a significant source of acid rain. Hotter combustion produces more NOx, whereas cooler conditions produce less. NOx emissions from a biomass combustor are typically similar to those from a coal-fired combustor or other fossil-fuel system, and generally depend more on the design of the combustion equipment than the type of fuel.

Sulfur oxide compounds (“SOx”) are another combustion product that is believed to be a source of acid rain – the molecules combine with water to form sulfuric acid. SOx compounds form when sulfur in the fuel combines with oxygen during the combustion process. Coal typically has high levels of sulfur, whereas most biomass has very little.

“Soot” is a generic term for uncombusted or partially combusted particles in exhaust gas. “Creosote,” on the other hand, refers to a tarry liquid that condenses after incomplete combustion of biomass (coal can also produce creosote). While residential fireplaces and wood stoves have long been sources of these pollutants, high efficiency combustion equipment produces little or none of these materials.

Most ash from combustion remains in the combustor. However, small amounts of the finest ash (called “fly ash”) is blown out of the combustor with the exhaust gas. Commercial-scale combustion equipment uses ash-trapping devices such as “cyclone separators” and “bag houses” to remove most of this ash before it is released into the atmosphere.

Air emissions from very large combustion equipment (i.e. power plants) are regulated by federal law. Smaller equipment is regulated by state and local rules. These regulations generally require advance permission and regular testing of stack gases to ensure complicance with the rules. Often, the smallest combustion equipment (i.e. residential equipment) is not regulated in this way. Instead, manufacturers of small devices may be required to certify that their equipment meets certain minimum requirements.

Other articles in this Combustion Series: